Nigeria's President Muhammadu Buhari has been called out by a fiery Bishop for fanning the embers of hate with his one-sided appointments. 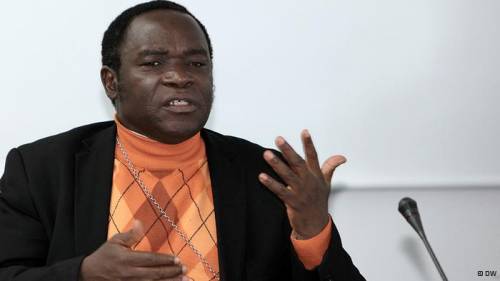 Bishop of Sokoto Catholic Diocese, Matthew Kukah,
President Muhammadu Buhari has been called out by a prominent religious leader over his lopsided appointments and percieved northern agenda.
The Bishop of Sokoto Catholic Diocese, Matthew Kukah, while calling out Buhari, accused him of institutionalising northern hegemony while reducing other parts of the country to second-class status.
Kukah, in his Christmas message on Friday, said there could have been a coup or war in the country if a non-Northern Muslim President had practised a fraction of President Muhammadu Buhari’s ‘nepotism’.
The Bishop warned that although Christians would not fight back, “God does not sleep”.
He said, “This government owes the nation an explanation as to where it is headed as we seem to journey into darkness.
“The spilling of this blood must be related to a more sinister plot that is beyond our comprehension. Are we going to remain hogtied by these evil men or are they gradually becoming part of a larger plot to seal the fate of our country?
“President Buhari deliberately sacrificed the dreams of those who voted for him to what seemed like a programme to stratify and institutionalise northern hegemony. He has pursued this self-defeating and alienating policy at the expense of greater national cohesion.
“Every honest Nigerian knows that there is no way any non-Northern Muslim President could have done a fraction of what President Buhari has done by his nepotism and gotten away with it.
“There would have been a military coup a long time ago or we would have been at war. The President may have concluded that Christians will do nothing and will live with these actions.
“He may be right and we Christians cannot feel sorry that we have no pool of violence to draw from or threaten our country. However, God does not sleep. We can see from the inexplicable dilemma of his North.”
Top Stories