Some of the investors said they invested in the company because of some promotional publications by major news outlets in the country.

According to a report by SaharaReporters, many investors of MBA capital and trading limited, a forex training and capital investment company, have made startling allegations against the company.

They have alleged that major stakeholders in the company committed fraud.

Some of the investors, who spoke with SaharaReporters, said they invested in the company because of some promotional publications by major news outlets in the country.

It was also gathered that the company, headed by Maxwell Odum, is registered with the Corporate Affairs Commission and the Special Control Unit Against Money Laundering. 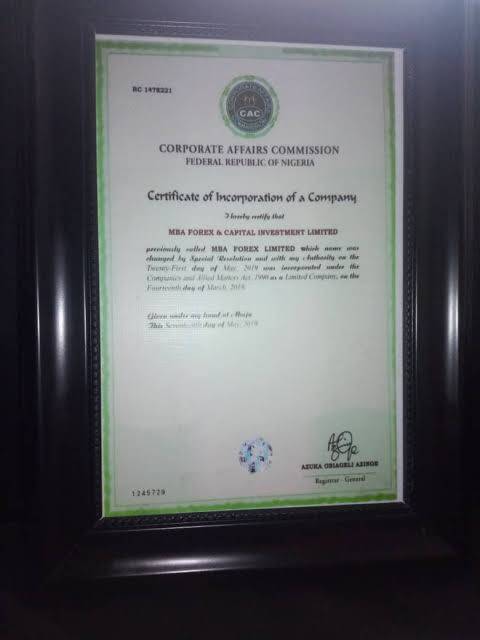 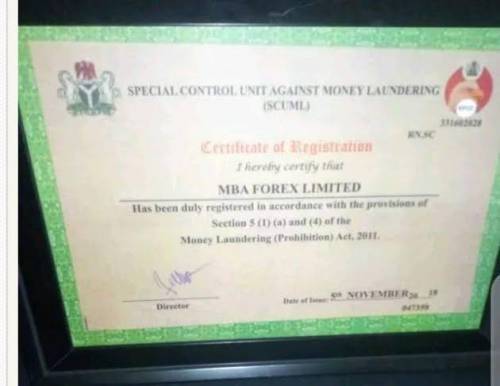 In the reports dated August 21, 2019, the Chairman, Anti-Corruption and Transparency Monitoring Unit, Presidential Villa, Alhaji Ahmad Sulaiman, was quoted as saying, "They (MBA) have come to us and we have assessed them. They want to be an advocate of not only the business they are doing but the anti-corruption and transparency drive of this government.

"They wrote to us and we assessed them. We asked them to go through ICPC (Independent Corrupt Practices and Other Related Offences Commission) to train their staff; they've also registered with the Central Bank of Nigeria, CPC (Consumer Protection Council), and other regulatory agencies. When we assessed them, we realised they are credible, ethical, and want to do serious business tailored to the policy of the current administration."

An investor, Favour Senibo, told SaharaReporters that she invested her money with MBA after seeing the publication stating that the company was established with a vision to impact the general populace with the knowledge of trading forex and creating platforms that will bring about sustainable financial freedom.

She also said the CEO, Maxwell Odum, claimed the company had been certified by necessary regulatory agencies in Nigeria and that the company, unlike others, was not a Ponzi scheme.

Odum had promised a 15 percent return of capital investment (ROI) for investors with a capital Investment of N360, 000 to N5 million.

According to her, a few months later, it was announced that MBA had been acquired by a certain company, World Citizen Equity Partners (WCEP), which would inject more investment to grow the business.

"After these publications of partnership on October 30, 2020, our ROI ceased. Odum claimed that MBAWCEP was undergoing an automated system upgrade to enable everyone does their transaction on their own without going to the office and it would take just one month, promising payments were coming soon," Senibo said.

She added: "So, with the support of one of the directors of WCEP, Vodina West, and Director, International Investment, the company promised that payments would resume fully on the 1st of December, that the Nigeria banks and regulatory bodies were the ones frustrating them and that it was the cause of the delay.

"They promised that those who were supposed to be paid on November 1 would be paid on December 1 and simultaneously like that. One month was added to our existing plan to make up for the month of November that wasn't paid.

"They apologised for all the pressure and inconveniences they had caused everyone. They also claimed their staff members had been defrauding them. They started a new verification process with online investors; carried a verification process to even offline investors with the promise to pay all ROI and capital. They later announced that they would refund only capital.

She also stated that the company refunded capital to a few but stopped after the Securities and Exchange Commission on February 5, 2021, set a new rule for collective investment schemes.

"MBA Trading sold 90 percent shares to World Citizen Equity Partners (WCEP) when investors were crying out for help. From what we know, WCEP deals with immigration obtaining dual citizenship-by-investment.

"MBA, please the poor and vulnerable people in Nigeria are counting on you with their investments and at this point, are left in the dark without communication. Even after the SEC announcement, we wonder what the CEO, Maxwell Weli Odum, and his WCEP counterpart, Mrs. Vodina West, are up to. As for me, my kids can't go to school because their fees haven't been paid. We can barely take two meals per day and our landlord is about to eject us from the house so we need help."

Another investor, Alalibo Amachree, said MBA had changed its name to Men In Business Thrive And Credit Cooperative Limited (MIBAC). He said he heard about the investment company from an online advert, and invested N3.5 million.

Amachree said he had no job at the moment and was already suicidal because of the challenges confronting him.

"I had received two ROIs before these sad events and as I speak with you, life has not been the same. Everything I have worked for over the last 7 years has disappeared into thin air.

"I currently don't have any job I am doing at the moment and all that runs through my mind at this time is suicide. I can't just imagine what is happening to me," he said.

Also, David Spencer another investor, said he was introduced to MBA by a staff member who claimed that the investment scheme was government approved.

He said he regrets his decision and was shocked by the recent developments.

He said, "The staff member told me the company has approval certificate from CBN and the Economic and Financial Crimes Commission. He also said SEC has certified the company hence I decided to invest my capital with them. As we speak, I am still in a state of shock. I have taken legal steps against the MBA, I wonder why an investment company approved by CBN and the EFCC will be like that.

"We later learnt that MBA lied to us that they also had SEC approval. I want to use this opportunity to call on the President and the National Assembly, to as a matter of urgency wade into this issue. If over 70, 000 investors lose their hard-earned money, that would further deplete the economy."

The investors claimed that Odum now lives in affluence on investors' money and owns over 200 plots of land that are being developed, including 130 plots allegedly bought around Sani Abacha Road in Port Harcourt, Rivers State. 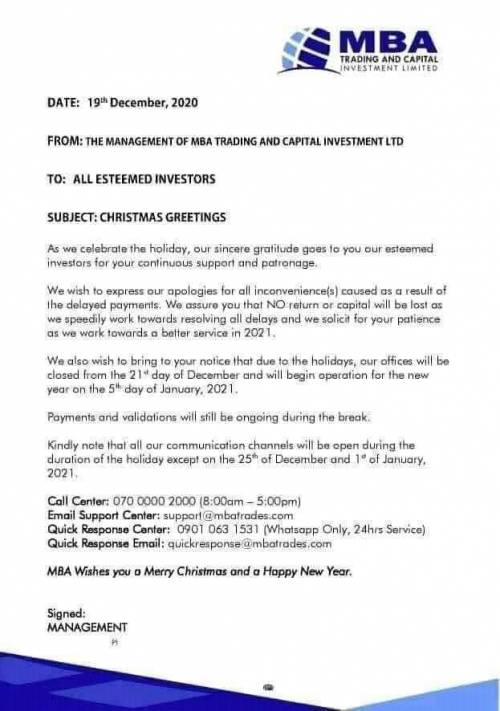 They also claimed that Odum was the highest donor in his church, Christ Embassy, last year, donating N1 billion to the church.

"I also forgot to mention that the WCEP office that was opened last year at Emeyel Street, GRA had its signpost changed overnight to read Apakari Luxury Citizen despite all that was going on.

"I blame myself for not taking pictures of that office when it was WCEP. I thought of it but ignored the voice that told me to do so," Senibo added.