A fuel station in Abeokuta has reacted after being called out for selling water as petrol. 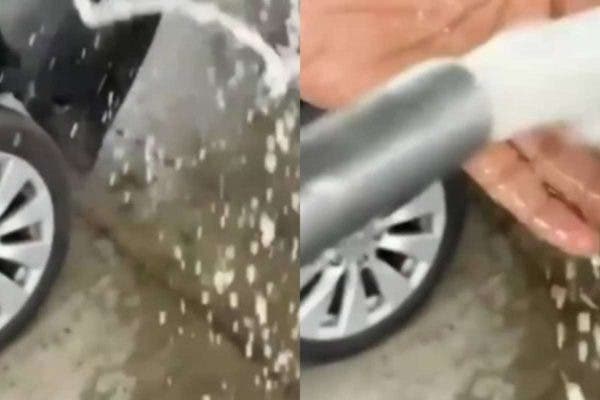 Water being sold as fuel
Fatgbems Petroleum has apologized over viral video showing its filling station selling water as fuel.
Journalist Adeola Fayehun, had earlier accused a filling station of selling water instead of petrol to unsuspecting motorists.
She shared a video of customers shouting at the filling station after it was discovered that their cars were allegedly filled with water instead of petrol. Some of the cars immediately developed faults after their cars were filled.
In reaction to the accusation, Fatgbems Petroleum, took to Twitter to release a statement sharing their own side of the story.
According to them, there was a water contamination issue at the station as a result of a water overflow into one of the station storage tanks.

The management of Fatgbems Petroleum Company Limited regrets the water contamination issue at our IBB retail outlet in Abeokuta, on March 14, 2021.
The said incident was a result of a water overflow into one of the station storage tanks.
Fatgbems will like to restate that this unfortunate incident is against our business ethics as we will not dispense low-quality products to our esteemed customers.
We, therefore, like to appeal to our esteemed customers and the general public to stay calm; as measures are already in place to address all issues as laid down by affected customers.
Once again, we sincerely apologize for all the inconveniences caused and hereby reaffirm our commitment to exceptional service delivery at all times.
See statement below:

STATEMENT ON WATER CONTAMINATION AT OUR IBB RETAIL STATION IN ABEOKUTA. pic.twitter.com/3ViuUMDogC