A heartbroken father has shared graphic details how terrorists abducted his son after killing seven in Borno. 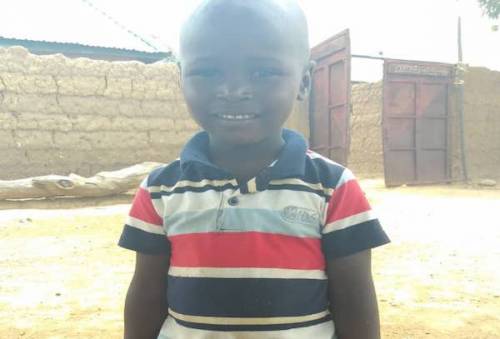 Adamu's abducted son
The father of a little 4-year-old boy has lamented while telling the tragic story how Boko Haram terrorists killed seven residents before abducting his four-year-old son, Amos.
The man is a farmer and commercial driver from Pemi community in the Chibok Local Government Area of Borno State, identified only as Adamu.
Amos has been with the insurgents since December 24, 2020 – the same day a pastor, Bulus Yikura, was abducted by the terrorists but was later rescued in the first week of March. Yikura has since his release relocated from Chibok with his family.
Chibok was where the Boko Haram abducted hundreds of schoolgirls in 2014 – some of whom have yet to be released till date.
Amos’ father, Adamu, lamented that his wife was presently depressed and in tears daily seeing their only son away with the insurgents, while calling on the Nigerian government to sue the same machinery which secured Yikura’s release for his son, Amos.
Speaking with SaharaReporters, Adamu explained that the insurgents met his son at home, carried him, and burnt his (Adamu’s) car in the compound and his house before they left.
He said, “The terrorists abducted him on December 24. The terrorists burnt my house; they carried my car and my child. I was not at home. Amos is my only male child. He has an elder and a younger sister.
“My wife went to fetch water in a well in a neighbouring compound. Before she would be back, the boy had been stolen. My child was stolen inside my car. I parked the car at home. They brought him out of the car and set the vehicle on fire.
“They also killed seven people in the community before they left. I want the government to help me rescue my child from the Boko Haram. I ask God to touch the hearts of the Boko Haram to return my child. I don’t have any job – my vehicle which was my means of livelihood was burnt. My wife cries every day and I assure her that the boy will soon be returned.”
SaharaReporters had a week ago reported that the Chibok community would like President Muhammadu Buhari, the legislators and the security agencies to rescue Musa the same way Pastor Bulus’ release was secured on the day his one-week ultimatum to live, expired.
“Despite the release of Pastor Bulus, we still have a four-year-old boy with the terrorists – Amos Musa. He was abducted on the same day the pastor was whisked away. His family is presently in disarray as they are hoping desperately that their son will be reunited with them. We want the government to assist us in rescuing this boy. He is our future,” one of the community leaders had pleaded.
Top Stories