Northerners have been lambasted by Otunba Wasiu Afolabi for working with Boko Haram before the terrorist group turned against them. 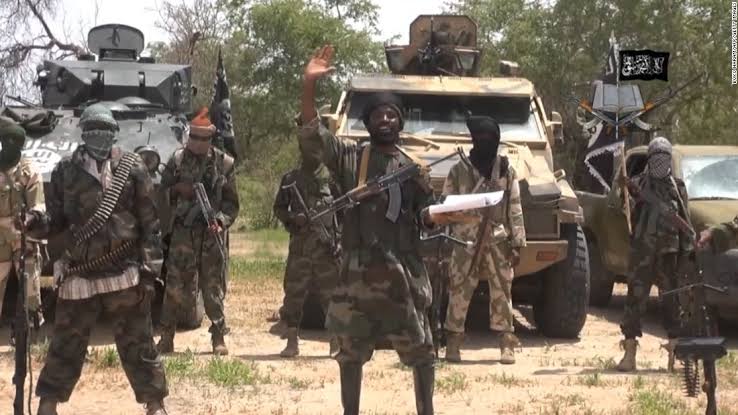 Boko Haram terrorists
The President of the late Frederick Fasehun's faction of the Oodua People’s Congress (OPC), Otunba Wasiu Afolabi has blamed northerners for treating Boko Haram with kid gloves.
Afolabi blamed northerners while lambasting the former Chief of Army Staff, General Abdulrahman Dambazau over his statement describing OPC as a terrorist organisation.
Afolabi said the South-West has no history of breeding terrorists like Northern Nigeria.
He therefore described as narrow-mindedness, displayed mischief and prejudice for the former Chief of Army Staff to have compared OPC to Boko Haram terrorists, according to a report by the Nation.
He said: “Is this an attempt to give a dog a bad name in order to hang it? It will not work. We shall not succumb to this cheap attempt at blackmail and negative profiling. OPC is not, has never been and will never be a terrorist organisation. Nobody should link us or liken us with terrorists. We have never been on the global radar of terrorism like Boko Haram because we have never even been remotely connected with terrorism.
“Dambazau and his likes should realise that there is no federal character in terrorism. The South-West has never bred any terrorist organisation, least of all OPC. Some people feel that the tragedy they brought upon their part of the country should be duplicated in the South. But, it won’t work, not even with the backing they are giving killer herdsmen.”
Afolabi who said OPC has continued to maintain excellent relationship with the police, Department of State Services and other relevant agencies for the maintenance of security, law and order in the entire South-West, alleged that Dambazau’s rhetoric and mindset show why the administrators of the Nigerian Army from the North have continued to handle Boko Haram with kid gloves.
He added that such an attitude has cost the lives of thousands of poor soldiers for nothing.
“Northern leaders have treated Boko Haram like a pet snake and allowed it to grow stronger instead of killing it once and for all. What they should realise is that there is neither federal character nor quota system in terrorism. The North should call a spade a spade and demand its leaders to bring this ugly Boko Haram insurgency to a close.
"It is no longer a secret that some people turned the fight against Boko Haram into an ATM. They exploited the Boko Haram insurgency to amass massive blood money that allowed them to purchase choice houses in places like Abuja, Dubai and the US.
“A case in point is the last #EndSARS protests. OPC operatives guarded the police stations and prevented several of them from being burnt down. Several Divisional Police Officers, officers and men are living witnesses to our patriotic action on that occasion.”
Afolabi recalled how OPC was formed in 1994 with millions of followers who fought for the entrenchment of democracy as part of NADECO (National Democratic Coalition).
He described OPC founder, Fasehun, as a Scottish-trained medical doctor, who, along with some others, were detained and charged to court several times but thereafter acquitted.
According to him, the organisation has secured the lives of Yoruba indigenes and settlers in the South-West.
He said, “Where was Dambazau when people were dying for June 12 and democracy? OPC was part of NADECO. Hundreds of OPC warriors paid the supreme price for the democracy under which Dambazau became Chief of Army Staff between 2008 and 2010 and Minister of the Interior between 2015 and 2019.”
However, speaking on agitations for a separatist Oduduwa Republic, Afolabi said only the entrenchment of equity, justice and restructuring would silence such agitations.
“There is no smoke without fire and no true Yoruba person is comfortable with the current situation in Nigeria today. Agitations, whether for Biafra or Oduduwa Republic, are being fuelled by the rising scale of insecurity, the unhindered killing by Fulani herdsmen, kidnapping and poverty. OPC will not go against the wish, aspiration and decision of the generality of Yoruba people on the matter.
“As Dr. Fasehun always said, Nigeria must come together to the negotiation table and fashion out a truly people’s Constitution that will emphasise true federalism, resource control and devolution of power. Without taking that road, Nigeria likely may break up.”
Top Stories