In this interview, Tedunjaiye who went viral, speaks on the situation of events surrounding the popular meme. 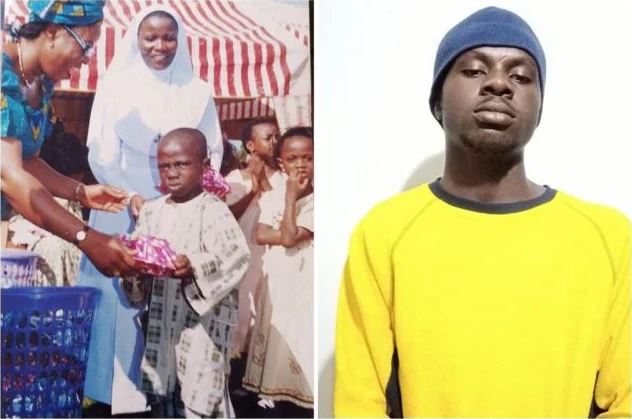 There is not a doubt that the word “meme” has since embraced new meanings since it was first coined by British ethologist and evolutionary biologist, Richard Dawkins, in his 1976 book, “The Selfish Gene”.

Nowadays, the term is a catchword for an image that has gone viral on the internet.

Standing out in the Nigerian meme subculture of late is “The Angry Kid” — a photo in which six-year-old Evans Tedunjaiye wears a stern expression on his face as he receives a present in a pink wrap from a woman at a ceremony.

In this interview with MICHAEL AROMOLARAN, Tedunjaiye speaks on the situation of events surrounding the popular meme.

How old were you when the photograph was taken? And on what date was that?

Could you tell us about the circumstances of the day that it was taken?

It was our graduation/prize-giving day in primary school and I had seen my crush earlier with someone else before I got called to collect my gift. So, everything felt doleful for me throughout the event. You know how it is seeing your crush with someone else.

When did you first notice that your photo had gone viral and what was your initial reaction to it?

Well, I posted the photo as a ‘throwback picture’ on August 6, 2020, without the intention of it going viral.

I posted it around the time private universities were having convocation ceremonies. So, a young guy from Babcock University (known as the ‘Angry bird’) posted his graduation pictures of him squeezing his face. So, Twitter users took my throwback picture and took his and captioned it with something like ‘How it started vs how it’s going’.

I was happy about it going viral though because people who knew I was the Angry Kid contacted me, saying they saw me trending.

Has the fact of your photograph going viral impacted your life in any way?

Yes, a measurable impact. I have been contacted by some companies to help promote their brand on social media.

Do your friends and family members know that you are a social media sensation?

Yeah, they all do.

What is your current station in terms of your formal education and/or occupation?

I am a student; I just concluded my Diploma in French studies at the Nigerian French Language Village Badagry, Lagos State.

Why do you think that your photograph, and the expression it captures, was able to resonate with many people?

I feel it represents a gift that is of no value to us. That is why people were able to relate to it.

Many popular memes tend to have titles such as ‘Disaster Girl’ and ‘Evil Kermit’. However, yours is not yet known by a single title. If you could give your photograph a title or caption, what would it be?

What do you hope to achieve going forward?

I wish to be a brand ambassador for local or international companies (Gucci, Angry Birds) or own a clothing brand of my own, which deals in the production or customising of t-shirts, polo shirts, caps and other fashion outfits.

I would also like to gain recognition within the French community, which is my course of study so that I could practice more and improve on my skills as an interpreter and a translator.

If you had the chance to trademark and auction the original copy of your photograph for a good price, would you do it?

For a good price, yes… with a trademark on it.