The actress told Saturday Beats that she initially considered using a surrogate to carry her children. 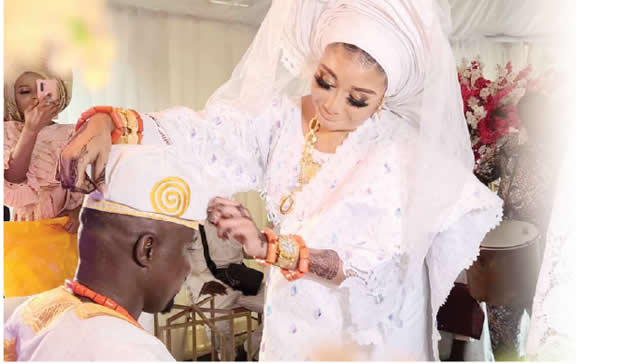 Liz Anjorin on her wedding day

Nigerian actress, Elizabeth Anjorin, who recently had a baby has spoken about the development,

The actress told Saturday Beats that she initially considered using a surrogate to carry her children.

She said, “People do not consider my age and my health. You cannot compare the health of a 25-year-old hustling woman to that of a 50-year-old housewife. The latter would have more time to take care of herself. Nobody will help one out of poverty. Bringing children to this world without the ability to take care of them is a sin. I am an only child, so one would think that my mother would have been able to give me the best but reverse was the case. My mother could not independently send me to school or feed me well. Meanwhile, some people have 10 children and they give them sound education. These thoughts helped me to be more determined to work hard. Thankfully, I am not a sex addict and I have been on birth control pills for a long time.

“But miraculously, I got pregnant on my wedding day and I did not know. It took me close to three months to know that I was pregnant. I did not plan for pregnancy at all because I was taking precautions. When I got married, I thought we were acting a movie. I and my husband had planned to opt for surrogacy. If I had eventually had my child through that or in-vitro fertilisation, I would have boldly spoken out about it to encourage other women.

“My first child is 23 years old, and I can’t begin to say what I went through. All I can say is that poverty did not allow me to care for and stay with my child.  If my mother did not take the responsibility of raising my child, I would not have been able to go to school or pursue other things. Some women end up on the street because of some of the decisions they make. I care about children deeply and I am so thankful that my husband was supportive all through my pregnancy. He remained unshaken even with all the reports that had earlier made the rounds about him. ”