It is alleged that Senator Tinubu got insulted by the woman's outburst and called her a thug which led to a shouting match. 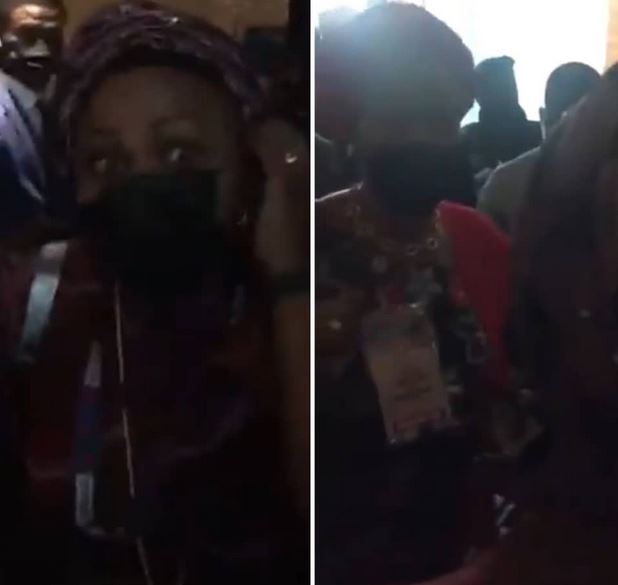 A video has surfaced online showing the moment a representative got into a heated altercation with Senator Oluremi Tinubu, wife of APC National leader, Bola Tinubu, for allegedly calling her a thug.

The incident happened at the South-west zonal public hearing of the constitution review which held at Marriott Hotel in Lagos on Wednesday, May 26.

According to reports, the main entrance to the hall was shut after the state governor, Babajide Sanwo-Olu, arrived at the event.

The organizers then informed other participants who were on a queue at the entrance to go home as registration for the day had closed. The participants refused, insisting they must be allowed in.

While they were standing their ground, lawmakers from Oyo state who were also late for the event came in and were about to be ushered into the venue when the others revolted.

As the shouting match continued near the front door, with those on the queue insisting that they had been unfairly treated, the Oyo lawmakers were led to the back door to make their way in. However, some people followed them, preventing them from being allowed into the hall. After some consultation with the personnel at the door, Senator Tinubu showed up at the backdoor to allow the lawmakers in.

As Mrs Tinubu was about to do this, a woman, who complained about being denied entry, decried the partial treatment and voiced out her frustration.

It is alleged that Senator Tinubu got insulted by the woman's outburst and called her a thug. This led to a shouting match between the woman and Senator Tinubu.

Watch a clip from the incident below;