It had been reported that Malami asked Buhari to make the move in a memo and replace it with Martial Law. 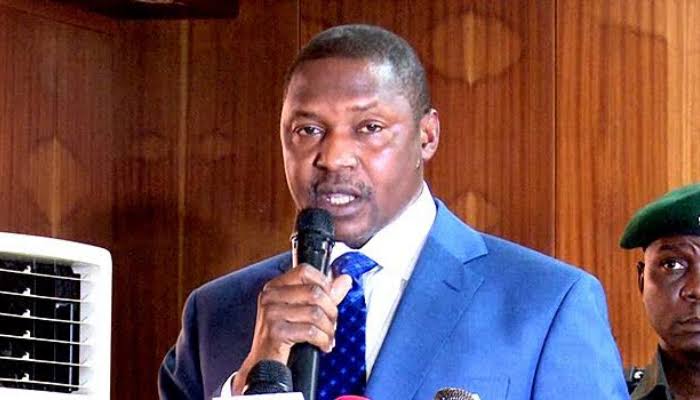 AGF, Malami
The Attorney General of the Federation and Minister of Justice, Abubakar Malami has opened up on allegations that he asked President Muhammadu Buhari to suspend the 1999 constitution.
It had been reported that Malami asked Buhari to make the move in a memo and replace it with Martial Law.
Reacting, Malami, a Senior Advocate of Nigeria and Chief Law officer of the country, insisted that such memo never emanated from his office.
In a denial statement released in Abuja and sent to DAILY POST, the AGF described the media report linking him with the memo as the handiwork of anti-constitution elements.
The denial statement was issued by Malami’s Special Assistant on Media and Public Relations, Dr Umar Jibrila Gwandu.
The statement read in part “The attention of the Office of the Honourable Attorney General of the Federation and Minister of Justice, Abubakar Malami,SAN has been drawn to a false and fictitious report alleging that there was a secret memo emanating from the Office to the Presidency.
“General publics are hereby asked to disregard the media report as fabrications of anti-constitutional democratic stability in Nigeria.
“Malami remains a true democrat who believes in rules of law and tenets of democracy and Constitutional order.
“The Office of the Attorney-General of the Federation and Minister of Justice is a constitutionally recognised one with its role and responsibilities embedded in the constitution.
“It is antithetical to common sense to think that the holder of such coveted Office as the Attorney-General of the Federation and Minister of Justice will stoop to what was printed by the media.
“The Government does not operate in secrecy as it is not a clandestine operation. Hence, Malami discharges his constitutionally recognized mandates in compliance with principles of transparency, openness and accountability.
A media organization had claimed having a leaked memo where Malami reportedly asked Buhari to suspend the 1999 Constitution and declare Martial Law on Nigeria
The media outfit, Peoples Gazette quoted copiously part of the allegedly leaked memo where the AGF reportedly suggested to President Buhari to do away with the 1999 constitution and opt for martial law to govern the country.
The report indicated that “President Muhammadu Buhari is on the verge of declaring a state of emergency across Nigeria, according to a secret memo that has now come to light as well as confirmation from government sources familiar with the matter, People’s Gazette has reported.
“This is as the administration struggles to rid the country of insecurity as terrorism, banditry and rebellion from separatist groups threaten the nation’s stability.
“Abubakar Malami, Nigeria’s Attorney-General and Minister of Justice in the said memo requested the President to move with alacrity to suspend Nigerian’s “fundamental rights guaranteed under Chapter IV of the Constitution,” said an exclusive published Wednesday by Peoples Gazette.
“The report noted that Malami, in the eight pages long-secret memo, dated May 4, 2021, counselled Mr Buhari, that insecurity across the country has reached a breaking point where a state of emergency declared by the President appears to be the only way to restore much-needed tranquillity, saying existing democratic techniques are no longer fit for purpose.
“The essence of declaration is to allow for suspension of constitutional and legal bureaucratic bottlenecks pertaining to matters of National Security with particular regards to fundamental rights guaranteed under Chapter IV of the 1999 Constitution and processes and procedures relating to procurements, among others,” the attorney-general reportedly said.
The Minister further advised that the “instruments of emergency” be immediately issued and published in the federal gazette with leaders of both chambers of the National Assembly, Ahmed Lawan (Senate) and Speaker Femi Gbajabiamila (House) kept in the loop.
“To douse probable legal tension, it is important for the proclamation instrument of the statement of emergency to expressly provide for the suspension of Chapter IV of the 1999 Constitution and its attendant enforcement rules,” Mr Malami wrote.
“The suspension of rights pertaining to matters of national security will then give legal backing for the proclamation of the statement of emergency to be operational and effective without litigious or judicial distractions.”
The Gazette’s report further read: “In the early pages of the document, Mr Malami cited widespread acts of insecurity and blamed prominent separatist agitators like Sunday Igboho and Nnamdi Kanu for fueling the protracted crisis that has enveloped the country and aggravated the social and economic conditions of Nigerians.
“The memo was endorsed to the president by National Security Adviser (NSA) Babagana Monguno and administration officials are divided on how to proceed with the advice.
“Clearly, different factions of our government have different positions on this alarming proposal,” a presidency official told The Gazette.
“But everyone agrees that the AGF holds a powerful sway over the president and it would be a miracle if the Constitution is not suspended as he recommended.”
“Another official also within the presidency, who confirmed hearing about the memo but had not seen it before they were reached by The Gazette, said Mr Buhari might have little resistance considering the potency of Mr Malami’s argument.
“The president is just saying they should act in the best interest of the country,” the official said.
“Even as the president, he seemed to have given up on his own ability to get the AGF to back down.”
However, Malami urged the general public to disregard the media report as fabrications of anti-constitutional democratic stability in Nigeria.
Top Stories