Lady Narrates How She Was Allegedly Kidnapped And Almost Killed In Ikoyi, Lagos (Video)


According to her, two minutes into the ride, the taxi driver brought out a gun and called a man to inform him that he has a victim. 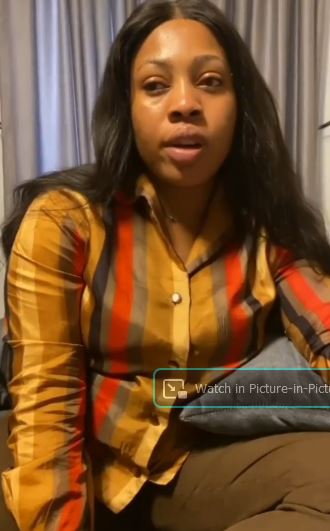 A young lady took to social media to recount how she escaped being abducted and killed by a suspected kidnapper in Ikoyi area of Lagos state after she boarded a taxi.

In a video that has gone viral, the young lady who couldn't control her emotions while narrating her experience, said on that Sunday, she had gone to see her godmother along Aromire in Ikoyi.

She claimed that after her visit, she ordered a taxi from one of the hailing apps to an eatery within Ikoyi. After she had finished from the eatery, the young lady said she tried getting another taxi from the hailing app but it was ''busy'' so she decided to use the ''normal taxis''

''I deliberated with the taxi guy, He said N2, 500. He collected N2000 to Agungi because it wasn't far. I had to squat at my friend's place because of Lagos traffic so I could get to work on time on Monday.''

She said she sat on the passengers seat in front with the driver. According to her, two minutes into the ride, the man brought a gun to her face.

''I was wearing a nosemask. I sat in front and then he was the only one in the car. It was meant to be like a charted car. Before I knew it, the guy pointed a gun at me. He called someone and said ''Oga I get person for here.''

The man told him to put it on speaker. He stopped the car while he was pointing the gun at me.'

The young lady claimed that the man at the other end of the telephone conversation then asked her what is her name and she mentioned it. He then asked her where she was from and she said Akwa Ibom

''The man now said what is your name. I told him and then he said where are you from? I said I come from Akwa Ibom. The man now said you are lucky you are my sister if not I would have killed you today. I was like Thank you sir. God bless you Sir. ''

The distraught young lady mentioned that the man went on to ask her where she was coming from and she replied saying she went to get food. The lady said the man then asked her what she does and she responded that she works in Ikoyi.

''He now said check her bag. I said I don't have any money in my bag, that only a few thousand Naira notes and five hundred Naira because I use it for transpotation to go to the office.

I don't know how God confused those people or gave the man sympathy for me. He said 'close your eyes' and he was checking my bag. He said what is your password of your phone. I told him my password. I think he typed wrongly. He now corked the gun at me and then after that, I told him that it was a mistake and that he should try it again. I now read the password to him. He opened the phone.

He said I should thank my God that I am his sister, if not he would have killed me and that next time, I should not enter cars that are not registered and that I don't know.''

She claimed that her 'abductor' later dropped her somewhere in Lagos Island at about after 9pm. She said thankfully she saw a commercial motorcyclist who she stopped and asked to take her somewhere safe.

She said the motorcyclist took her to Bonny Camp where she was able to get a bus home.

Watch a video of her recanting her experience below;