It happened that the suspected tout had an argument with the lady over the parking space and decided to unleash his anger by hanging on her bonnet. 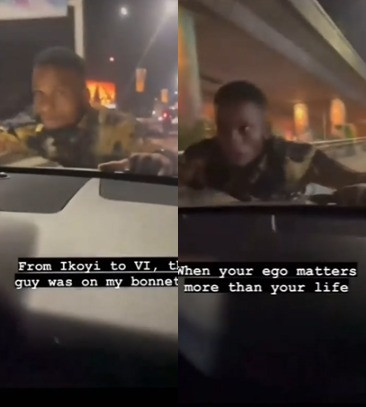 The man on the bonnet of the woman's car
A Nigerian 'spider man' has left many people in a state of shock after hitching a ride on the bonnet of a lady's car.
The mild drama happened in Lagos on Sunday, July 25.
It happened that the suspected tout had an argument with the lady over parking space.
In retaliation, he hung on her bonnet from Ikoyi to VI, Lagos in protest of her parking on ''his parking space''.
According to the lady, she attended an event with her partner and parked her car on a spot she found available. The suspected tout came out from nowhere, laying claim to the spot. He deflated her tyres and hung on to her car as she drove from Ikoyi to Victoria Island.
Watch the video clip of the tout hanging on the car bonnet while the lady drove off below: