A video of the incident showed the man undressing completely in the middle of a busy road. 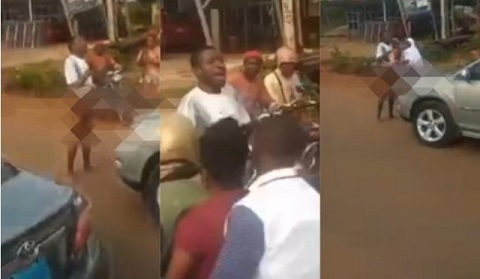 Man runs mad
A young man suspected to be an Internet fraudster has reportedly ran mad after alighting from his luxury car.
A video of the incident showed the man undressing completely in the middle of a busy road.
The young man who seemed to have lost his senses could be heard calling himself a member of a popular confraternity cult group, Aye, as he displayed full-blown insanity on the road.
A voice in the background could be heard narrating how he began the dramatic display after parking his car in the middle of the road.
Some other bystanders beckoned on the young man to move his vehicle from the road as he wanders off on foot.
Watch the video below: