Photo Of Wanted Phone Snatcher Who Was Nabbed In Kano


He said the suspect, who has been on the police wanted list, has been terrorising people at Rijiyar Lemo, Bachirawa and Kurna area. 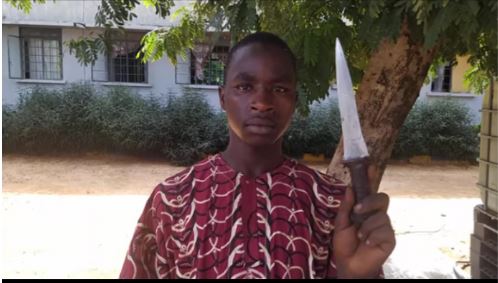 He said the suspect, who has been on the police wanted list, has been terrorising people at Rijiyar Lemo, Bachirawa and Kurna area.

Kiyawa explained that one Muhammad reported to police that on July 9, 2021, a criminal attacked him while on a tricycle to a market, injured him and snatched his phone, a Gionee M11.

He said after police received the report, the state Commissioner of Police ordered the Rijiyar Lemo Division to swing into action to arrest the criminal.

Kiyawa said on August 23, 2021, police succeeded in arresting the hoodlum after they had been trailing him for days.

Speaking to DAILY POST, the suspect revealed that he has been terrorising people in the area for over a year and had snatched no less than 15 phones.

Police spokesman said the case was transferred to the CID for further investigation.

He said the suspect will be charged to court after the investigation.

Phone-snatching has become a serious security issue affecting Kano metropolis and environs causing death and injury to many people.