The leaked memo on Wednesday revealed that the bushy areas around the officers’ quarters to the fence area gave the bandits easy concealment to escape. 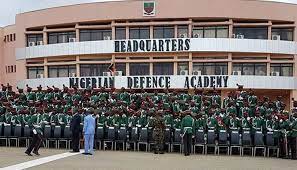 According to a report by Daily Trust, a leaked memo from Defence Headquarters on the assessment of the kidnap incident at the Nigerian Defence Academy (NDA) has revealed that the bandits may have gained access into the academy through a loose barbed wire fence along the Kaduna International Airport road in Afaka.

The leaked memo on Wednesday revealed that the bushy areas around the officers’ quarters to the fence area gave the bandits easy concealment to escape.

The memo read, “Further assessment revealed that the bandit’s escape route leads across the airport road to an open farm/bush area near Gidan Gado village in Afaka. The bandits are believed to have escaped either to Buruku and Maguzawa axis or the Riyawa axis in Igabi which is known as notorious bandits’ hideouts.

“Consequently, there is need for a robust clearance operation along those areas. Although there is a frantic joint effort by troops and other security forces in the state with a view to rescuing the kidnapped officer.

“It is strongly suggested that the security arrangements in NDA need total overhauling, this is with a view to averting future recurrence as monitoring continues,” the memo read.

The memo, however, mentioned that the Chief of Defence Staff, General Lucky Irabor had visited the academy on August 24, over the incident.

The CDS and his entourage among them senior military officers were said to have been received at the Kaduna International Airport by the NDA commandant and other Senior Officers of the academy.