Recall that gunmen killed Odume at a supermarket at Amaifeke in Orlu, in the Orlu Local Government Area of the state. 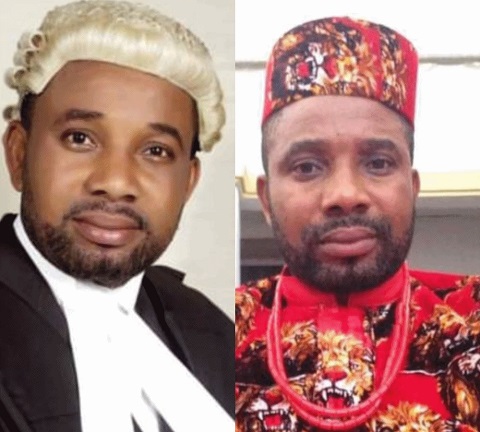 Odume
The Indigenous People of Biafra (IPOB) has maintained it has no hands in the death of popular Imo lawyer, Darlington Odume.
Recall that gunmen killed Odume at a supermarket at Amaifeke in Orlu, in the Orlu Local Government Area of the state.
Odume, a native of Umudara village in Amaifeke- Orlu, was rushed to a hospital in the area but was rejected by the hospital management.
He was however referred to the Imo State University Teaching Hospital, Orlu, but died on the way to the teaching hospital.
In a statement on Sunday signed by its spokesman, Emma Powerful, IPOB refuted reports that it was responsible for the death of the lawyer also known as Omekagu.
Powerful stated that the group is not involved in the killings occurring in the South East, adding that the group is only involved in Biafra agitation.
He said: “We the Indigenous People of Biafra (IPOB) ably led by our great leader Mazi Nnamdi Kanu, distance ourselves from the gruesome murder of a legal practitioner Barr. Darlington Chume Odume popular known as Omekagu who was murdered in Amaifeke Orlu Imo State by the state-sponsored group known as unknown gunmen.
“Contrary to allegations by those bent on demonizing IPOB, IPOB has no hand in the cruel and unconscionable killing of Barrister Darlington Chume Odume. Those perpetrating these murderous activities in Imo State and other parts of Biafra land are doing so just to implicate IPOB and the Eastern Security Network ESN.
“We have severally explained that we have no hands in these gruesome killings in Biafra land but some do not want to believe us. IPOB is a non-violent and peaceful movement with a presence in over 100 countries. We are only after the peaceful restoration of Biafra. Killings are not part of our mandate. Those committing these heinous crimes only do so to possibly implicate us and destroy our global image but we are innocent.”
Powerful stated that IPOB is not a violent group and cannot hurt lawyers or journalists, urging the Nigeria Bar Association (NBA) not to be deceived by false media propaganda of security agencies.
He added: “The Nigeria Bar association, NBA should not be deceived by Nigeria police and DSS with their false media propaganda. It makes no sense for IPOB to go after lawyers or Journalists, for instance, assuming we are to be violent.
“These two professionals are rather the best of our friends as they are the ones at our rescue in our quest for Justice. We will never contemplate hurting anyone belonging to either of these noble professions or any profession for that matter. Lawyers have been helping this struggle and facilitating the release of our people in different parts of Nigeria. They put their lives at risk for our sake, and there is no way we can sensibly reciprocate this rare gesture by going after them.
“It’s an irony and most illogical. Those linking us with this barbarity should please look for a more intelligent script. IPOB cannot come down too low by killing our lawyers, journalists and Human Rights groups and persons”.
Top Stories