The protesting legionnaires who carried placards, gathered at the main gate of the company’s headquarters, alleging that their salaries were not increased throughout the period they worked for the company. 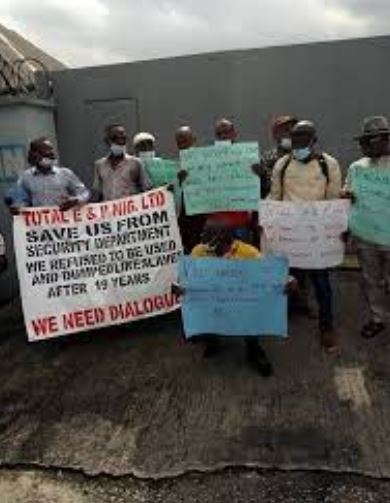 Over 49 dismissed workers of Total E&P Nigeria Limited, stormed the headquarters in Port Harcourt, Rivers State on Wednesday, to protest over what they term ‘forceful retrenchment’ by the oil and gas firm.

The protesting legionnaires who carried placards, gathered at the main gate of the company’s headquarters in Port Harcourt, alleging that their salaries were not increased throughout the period they worked for the company.

One of the sacked workers, Emuze Emmanuel, wondered why 49 of them were forcefully sent home after serving the company for many years.

“We want to know why 49 of us were forcefully sent away from Total after long years of service. Out of the 49 persons, one person died and one other person was recalled to resume work.

“For 13 years of service, there was no increment of salaries. We were denied many benefits, including the COVID-19 palliatives that other contract workers of the company benefited from,” Emmanuel stated.

He explained that they resorted to the protest after several efforts to discuss their plight with the security management of Total E$P failed, saying that the action was to draw the attention of the firm’s legal unit and human resources department to their suffering.

Also speaking, another sacked worker, Irokah Kingsley, said that they waited in vain to get feedback from the company.

“We reached out to the head of legionnaires but there was no response. Instead, we were told that we would be confronted by the military if we came to the gate.

“Our demand is to meet with the human resource, legal departments and the head of security at a roundtable,” Kingsley added.