The DIA noted that while blacksmiths and the rifles they traditionally produce are an integral part of some cultures in the country, some now produce more sophisticated weapons that posed a security threat. 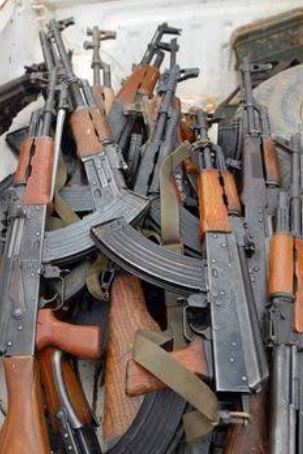 The Defence Intelligence Agency has stated that some blacksmiths in Nigeria now have the expertise to manufacture assault weapons such as AK-47, revolvers and pistols hence the need for them to be integrated into the Defence Industries Corporation of Nigeria to exploit their talents.

The DIA noted that while blacksmiths and the rifles they traditionally produce are an integral part of some cultures in the country, some blacksmiths now produce more sophisticated weapons — a development he said posed a security threat.

Representing the DIA at a public hearing organised by the House Committee on National Security and Intelligence on four security-related bills in Abuja on Monday, Air Commodore F. G. Okoyi said, “The cautionary attachment to blacksmith skills, as well as the traditional weapons manufactured for hunting, ceremonial and ornamental purposes, has remained the symbol of power and prestige in some traditional communities in Nigeria.

“However, in recent times, blacksmiths have advanced their skills and now possess the capability to manufacture assorted and sophisticated rifles such as AK-47, revolvers, pistols, improvise explosive devices, among others.

“This development has created the need to identity, monitor and regulate their activities; thus, the need for these blacksmiths to be integrated into the Defence Industries Corporation of Nigeria to enable all defence industry complex exploit their talents.”

He added, “Meanwhile, the bill should be mindful that Section 28 of the Fire Arms Act of 1957, which prohibits the unlawful manufacture of firearms, has not been repealed, hence the need to consider possible benefits to be derived from collaborations between Nigeria and local arms manufacturers by further reviewing extant laws that would support private sector participation in local arms manufacturing is very necessary.”

Okoyi also called for the control of the acquisition of scrap metals, noting that the elements used locally to manufacture Improvised Explosive Devices consist of various components such as initiator, switch, main charge, power surge and container.

He added that an IED may be further enclosed with additional enhancement such as nails, glasses or metal fragments designed to increase the amount of shrapnel propelled by the explosion.

“These items are most often collected by scavengers who move around from one location to another, in residential and business premises, sourcing and collecting discarded items such as scrap metals, plastic, beverage cans, metals, among others, from refuse dumps and bins. Their activities are mostly not scrutinised by any authority.

“The agency considers the bill gives more power to law enforcement agencies to monitor the activity of scavengers, movement and the use of scrap metals and other materials they may collect and sell to be used for the manufacturing of IEDs,” he stated.

The Air Commodore further called for the control of manufacturing and distribution of fertilisers.

According to him, the frequent demand for fertilisers has rapidly led to an increase in the establishment of illegal fertiliser companies especially in the northern part of the country.

Okoyi said, “Fertilisers are being sold to unscrupulous persons who use the chemical substance locally as explosive materials to manufacture IEDs capable of causing massive loss of lives.”