Reacting on Wednesday, the Nigerian Army accused the dismissed soldier of lying. 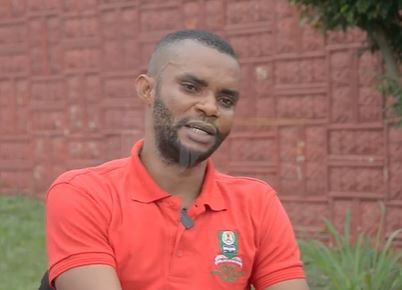 Ahunanya
The Nigerian Army has responded to a video making the rounds on social media how a soldier was dismissed for demanding better equipment to fight Boko Haram.
Reacting on Wednesday, the Nigerian Army accused the dismissed soldier of lying.
In a statement on Wednesday by Onyema Nwachukwu Brigadier General, Director Army Public Relations, he said the Nigerian Army had taken congnisance of a video clip currently making the rounds on the social media, where one dismissed Trooper Temple Ahunanya narrated a concocted story of how he was arrested, tried and sentenced to death for requesting better weapons to fight Boko Haram insurgents.
He said it was crucial to set the record straight and alert Nigerians to beware of the dismissed soldier’s criminal antics, aimed at defrauding members of the general public, as it posed a great danger to members of the public.
“The Nigerian Army wishes to commend trooper Ahunanya for making an attempt to serve this great nation.
“He is also commended for passing through the rigours of military training and the fog of war.
“It is, however, unfortunate that despite these, he lacked the requisite qualities to progress with the profession, as he was a bad egg and a cancerous element that negatively infiltrated the ranks, corrupting the good conduct and morale of troops in the process,” he said.
He said it was also important for the public to note that dismissed Trooper Ahunanya was enlisted in the Nigerian Army on the 20th of August 2012, and passed out from training on the 17th of December of same year.
He was arrested in 2014, tried and dismissed for conduct prejudicial to military discipline and cowardice.
He was convicted, but escaped while awaiting Army Council’s approval of his verdict.
This singular act portrays a tendency for evasion of justice and criminality.
“Hence the general public must beware not to be misguided by his misconstrued narratives as a failure on the part of the military or the government, but a ploy to creat and peddle falsehood in the media space to gain undeserved sympathy.
“While in service, Ahunanya was rude, indisciplined, criminally minded and a very uncultured individual, who failed to imbibe the basic ethics and regimentation of the military profession,” the statement said.
According to him, the dismissed officer’s unpatriotic and cowardly tendencies manifested when he was deployed for a mission to counter Boko Haram Terrorists’ attack and save lives of innocent Nigerians, in so doing.
“However, against extant military laws, the dismissed soldier disobeyed and led other cowardly soldiers to disobey duly constituted authority.
“Ahunanya still displayed his criminal tendency in his video, as he disparaged the Nigerian Army to spike sympathy and whip up sentiment to lure unsuspecting members of the public to raise funds for his criminal activities by posting his bank account details along side his video.
“This is evidently an attempt to financially hoodwink members of the public.
“The Nigerian Army is an organized Army that conforms with the dictates of International Laws of Armed Conflict and institutionalized Order of Battle.
“Our troops are not terrorists or Insurgents who could use all manner of unlawful and unconventional arms. “The Nigerian Army operates, following universally accepted doctrines and Order of Battle. Our troops are better trained, equipped and professional in the conduct of campaigns and operations.
“Therefore, it is surprising that Ahunaya compared a group of misguided elements operating under the influence of drugs and twisted ideologies to Nigerian Army troops,” the statement further said.
Watch video below:
Top Stories