The state government questioned why a state of emergency will be declared in Anambra when such has not been done in other troubled states with proven cases of insecurity such as Borno, Plateau, Niger, and others. 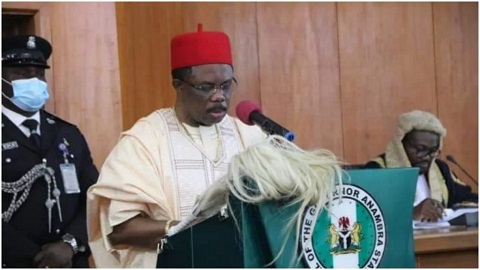 Obiano
Anambra State government has kicked against moves to declare state of emergency in the state.
The state said the move by FG to impose a state of emergency is politically motivated.
The state government questioned why a state of emergency will be declared in Anambra when such has not been done in other troubled states with proven cases of insecurity such as Borno, Plateau, Niger, and others.
It argued that worse things have happened in many Northern/APC-controlled states and the federal government has not deemed it fit to declare a state of emergency in such places.
The reaction comes hours after the Attorney-General of the Federation (AGF) and Minister of Justice, Abubakar Malami, said drastic action may be taken if the continued killings and violence in Anambra State does not stop.
Malami disclosed that the Federal Government may declare a state of emergency in the South-East state to ensure that the forthcoming governorship election holds.
The minister said the government has resolved that the November 6 election will take place, adding that the government is determined to ensure a hitch-free election in Anambra.
Briefing newsmen on Wednesday after the Federal Executive Council (FEC) meeting at the Presidential Villa, Abuja, Malami noted that the security of lives and properties of Nigerians living in Anambra is paramount to the government.
The minister stated that a state of emergency may be declared in the state if national security is attacked, and the sanctity of the constitutionally guaranteed democracy is threatened.
But the Anambra government through the state Commissioner for Information, Don Adinuba said the statement by Malami is a confirmation that the recent troubles in the state are politically motivated, likewise the planned move to declare a state of emergency.
Adinuba said the recent disturbances in the state do not warrant the declaration of a state of emergency, adding that the state government is aware of its responsibilities to the people.
He argued that until recently, the state has been one of the most peaceful in the country and despite the recent disturbances, everything remains under control.
“Nigerians are outraged by the threat of the honourable attorney-general and minister of justice of the federation, a senior advocate of Nigeria,” he said in an interview with Channels TV.
“Since the renewed violence in Anambra state, which we believe is politically motivated, not more than 15 persons have been killed.
“How many persons have died in Borno, Niger, Kaduna, Yobe, Zamfara? Even Imo, which is APC-controlled, and Ebonyi, [also] APC-controlled, has anybody threatened emergency rule in any of these states?
“For the past seven years, Anambra state has remained the safest state, most stable in Nigeria. We remained the only state in the country that for the past seven years, we have not experienced a single bank robbery.
“What is going on here is politically motivated and the declaration by the attorney-general of the federation is a confirmation.
“I don’t want us to live in denial. What prompted the attorney-general of the federation to make that declaration is pure politics. There is no point being in denial.
“I have asked a very simple question: What is the situation in Borno, Niger, Plateau, Benue, Adamawa and Taraba? Elections were held in all these states, free and fair, declared by INEC.
“What is so special that the federal government of Nigeria should be contemplating a state of emergency. It is all about politics. There is nothing that has not been done to ensure that the right candidates do not participate in the election, including going as far as Birnin Kudu.”
Top Stories