How Speaker, Gbajabiamila, Governors, Others Spent Millions Of Naira To Visit Ailing Tinubu In London


Tinubu, an influential member of the ruling party has been in London for medical attention in the last three months. 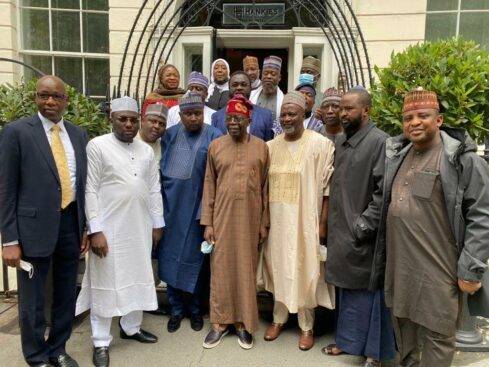 Daily Trust reports that no fewer than 58 top politicians and political office holders in the country have spent millions of naira to visit the National Leader of the All Progressives Congress (APC), Asiwaju Bola Tinubu, in London, United Kingdom (UK).

Tinubu, an influential member of the ruling party has been in London for medical attention in the last three months. Allies of the former Lagos State governor said he had undergone knee surgery and he is currently undertaking physiotherapy.

Since August 12, when President Muhammadu Buhari visited him at Duchess Mews, Portland Place, Central London home, his political godsons, admirers, and supporters have turned the residence into a Mecca of a sort. Buhari was in the United Kingdom like Tinubu for medical attention.

Tinubu is one of the top shots of the APC said to be eyeing the presidency. There have been controversies over the reported pact between him and President Buhari on the 2023 presidency.

Governors who have so far visited include Babajide Sanwo-Olu (Lagos), Dr Kayode Fayemi (Ekiti), Rotimi Akeredolu (Ondo), Dapo Abiodun (Ogun), and Umar Abdullahi Ganduje (Kano), who was in the United Kingdom for his son’s graduation.

Speaker of the House of Representatives, Femi Gbajabiamila was also there. Traditionally, the Speaker travels with some of his aides.

The Speaker of Lagos State House of Assembly, Mudashiru Obasa, and House of Representatives' member, James Faleke (APC, Ikeja) were also there.

The latest people to pay him were members of the Northern Caucus in the House of Representatives, led by Deputy Speaker, Ahmed Wase.

Minus President Buhari, Ganduje, and three others who were in the United Kingdom for personal reasons, 53 persons were in London for the former Lagos State governor.

With the increasing prices of tickets, at least each visitor would have spent between N4 million and N5 million on First Class or Business Class return tickets to the UK, based on our findings from travel agents.

This puts the money spent by those who visited Tinubu at N265 million for the 53 politicians.

This is in addition to other expenses on hotel accommodation in London, feeding, among others. An average room in a hotel per night costs between 150 and 200 pounds (N90, 000 and N120, 000), according to information obtained from some travel and leisure companies.

A Business Class ticket on the other hand costs between $4,000 and $6,000 depending on the time the booking was done.

While Tinubu is currently not holding any political office as he remains a private citizen, Nigerians have been talking about the alleged deployment of taxpayers’ money by politicians to visit him.

A public affairs analyst, Comrade Toyin Raheem, said while there was nothing wrong in paying a visit to someone who is indisposed, the majority of those doing the visiting must have spent public funds to embark on the visits.

Raheem, who is the Chairman of the Coalition Against Corruption and Bad Governance (CACOBAG), said the money could have been better spent on providing basic amenities that would benefit the masses.

He said, “In African culture, there is nothing wrong in visiting somebody that is sick but it shouldn’t be at the expense of the masses. Now, the majority of these people going to visit Tinubu used public funds. The money they spend does not belong to them.

“Has that now become part of their projects? There are a lot of things that need to be attended to. There are a lot of infrastructures that are crying for attention, yet many of them diverted money meant for the people to go and visit their leader. Nobody says they should not go and visit their leaders but it should be from their pocket, it shouldn’t be money that belongs to all of us as a people. It is wrong.”

Dr Chido Onumah, Coordinator, African Centre for Media and Information Literacy (AFRICMIL), said that those engaged in the trip to visit Tinubu in London and spending states resources would probably claim they are not using state resources.

“But it is also a pointer to the nature of the politics of our ruling class. How members of that class are beholden to a few people at every moment.

“For me, the bigger issue is the fact that public officers who have the opportunity to make a difference do not see the importance of fixing the country’s health system,” Onumah said.

On his part, Malam Hamza B. Lawal, the Chief Executive of Connected Development (CODE) and founder of the ‘Follow the Money’, said that by discussing whether or not politicians are using state resources to visit Tinubu, is dwelling on issues that should be of no importance in the national discourse.

He said, “There is no question that using taxpayers’ money for such trips is wrong, but what should concern us is the root cause of politicians acting with such impunity and if you ask me, it is lack of proper accountability.

“This is why we ‘Follow the Money’ so that it doesn’t enter private pockets or is misappropriated. Until we have solid institutions and systems where every naira and kobo used in public offices are accounted for, we are going to keep debating the moral justification or legal apparatus for government officials to use taxpayers’ money to visit their godfather abroad.”