This was revealed by lawyers from three chambers on Thursday, in a document signed by four lawyers including Bolaji Gabari, Mojirayo Ogunlana-Nkanga, Gaye Sowe, and Nelson Olanipekun. 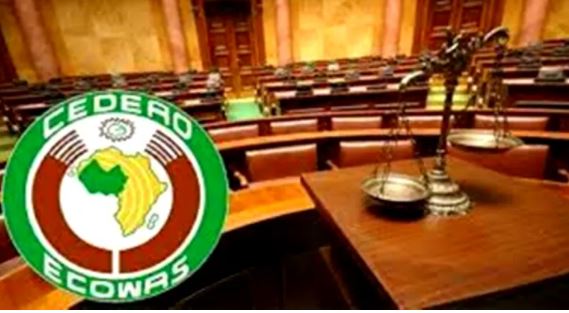 Just as #EndSARS protesters commemorate the first anniversary of the protest that erupted from Ughelli, Delta State, to other parts of the country over police brutality and extra-judicious killings, three victims of the protest have sued the Federal Government at the ECOWAS Court for justice, according to a report by Vanguard.

This was revealed by lawyers from three chambers on Thursday, in a document signed by four lawyers including Bolaji Gabari, Mojirayo Ogunlana-Nkanga, Gaye Sowe, and Nelson Olanipekun, and made available to Vanguard during a virtually held press conference on the matter.

According to the lawyers their service is purely pro-bono to the three applicants who approached them, and also explained why the applicants approached the ECOWAS Court, which is a regional court that adjudicates cases within its jurisdiction of member states in West Africa sub-region, and it is known for its neutrality and adherence to international standards in adjudicating cases.

They also pointed out that justices that comprise the panel at the ECOWAS Court are judges with various international experiences, and not one judge that will adjudicate on the matter brought to them, which that the court has lived up to its name as it would analyse the issues and facts before it, would give an international standard judgment, and has the boldness in determining cases without being influenced, and its judgment will have a ripple effect.

They also stated that the three applicants who approached them are seeking justice, and have declared that the Nigerian State has violated her obligations under the Nigerian Constitution, International laws and most especially the African Charter.

They said: “Three Applicants who witnessed and were victims of the military and police onslaught that occurred in the event popularly known as #EndSARS protests which took place on the 20th of October 2020 at Lekki Tollgate have filed an action before the ECOWAS Court seeking the enforcement of their fundamental rights.

“The Applicants, who continue to suffer untold psychological and mental trauma and threat to life, from that day, have approached the ECOWAS Court, known for its neutrality and adherence to international standards in adjudicating cases, to consider and hold that the rights of the Applicants and other peaceful protesters have been grossly violated by the Nigerian State and its agencies.

“The Applicants seek amongst others, the declaration that the Nigerian State has violated her obligations under the Nigerian Constitution, International laws and most especially the African Charter; failed and fails to protect the lives of the Applicants and citizens; protect its citizens from extrajudicial killings, police brutality and to promote and provide security for its citizens; that the State persistently tolerates and promotes a climate of impunity in the country as a result of its systemic failure to condemn, effectively identify and secure accountability for a series of grave attacks against the Applicants and people of Nigeria and failure to convict perpetrators of human rights violations in the years preceding the 20th and 21st of October 2020 Lekki Tollgate Shooting and till date.

“All of these constitute a gross violation of fundamental human rights guaranteed by Sections 38 and 40 of the Nigerian Constitution and Articles 9 and 10 of the African Charter on Human and Peoples Rights.

“Given this disregard for the rights of Nigerian people, we are commencing litigation against the Federal Government of Nigeria at the ECOWAS Court of Justice to seek redress for the victims and accountability against the Government who through her agents were involved in the rights abuses that led to the #EndSARS protests and its aftermaths.

“We will pursue our demands through the ECOWAS Court to ensure that the government of Nigeria is held to account for the killing of Nigerian citizens and the abuse of their rights as enshrined in the Nigeria Constitution, the African Charter of Human and Peoples Rights and other International Human Rights instruments that Nigeria is a signatory to.”

They also lamented that, “Today, victims of police brutality are yet to be adequately compensated, and justice has yet to be served either for their families or on the perpetrators.

“Post the proscription of the protests by President Muhammadu Buhari, the online and offline attacks on human rights defenders, the arrests and illegal detention of protesters, the deregistration of organisations and blanket tag of terrorism on bank accounts belonging to protesters, etc. were some tactics the government and its agencies employed, presumably to silence the dissenting voices.”

The lawyers also added that the choice of ECOWAS Court is the fact that this strategic litigation is to push against that wave of clampdown of citizens across Africa, “So we are not just fighting for Nigeria but we are fighting for Africa.”