Okukur was stolen by British colonial forces in 1897 and given to Jesus College in 1905 by the father of a student. 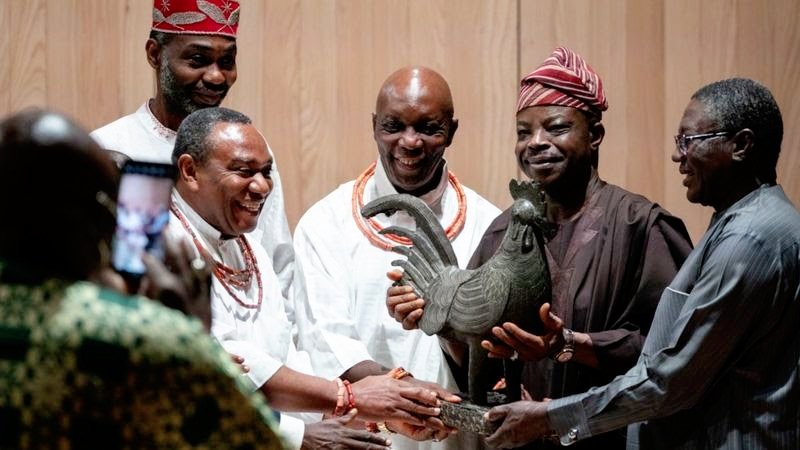 Cambridge University returns stolen Okukur to Nigeria
A bronze cockerel named ‘Okukur’ stolen from Nigeria by British colonial forces has been returned to Nigeria.
Cambridge University College handed back the bronze cockerel to Nigerian officials on Thursday.
Okukur was taken by British colonial forces in 1897 and given to Jesus College in 1905 by the father of a student.
BBC reports that the decision to return it was made in 2019 after a spirited campaign by students.
“It’s massively significant. It’s a momentous occasion”, said Sonita Alleyne, master of Jesus College.
The official stressed that returning the artefact was the “right thing to do”.
Okukur is a piece of “cultural and spiritual significance to the people of Nigeria. It’s part of their ancestral heritage”, Alleyne added.
The Nigerian government would decide how and when to move Okukur removed from display at the college in 2016.
The bronze statue will be given to National Commission for Museums and Monuments (NCMM).
In 2019, the college’s Legacy of Slavery Working Party agreed that the cockerel “belongs with the current Oba at the Court of Benin”.
The incumbent, Omo N’Oba N’Edo Uku Akpolokpolo, Ewuare II, expressed hope that countries and institutions would give back artefacts taken from Benin.
The monarch urged them to “expedite the return of our artworks, which in many cases are of religious importance to us”.
Top Stories