Recall that the Students Union Government President in TASUED, Sodiq Ridwan, was arrested alongside many others by soldiers. 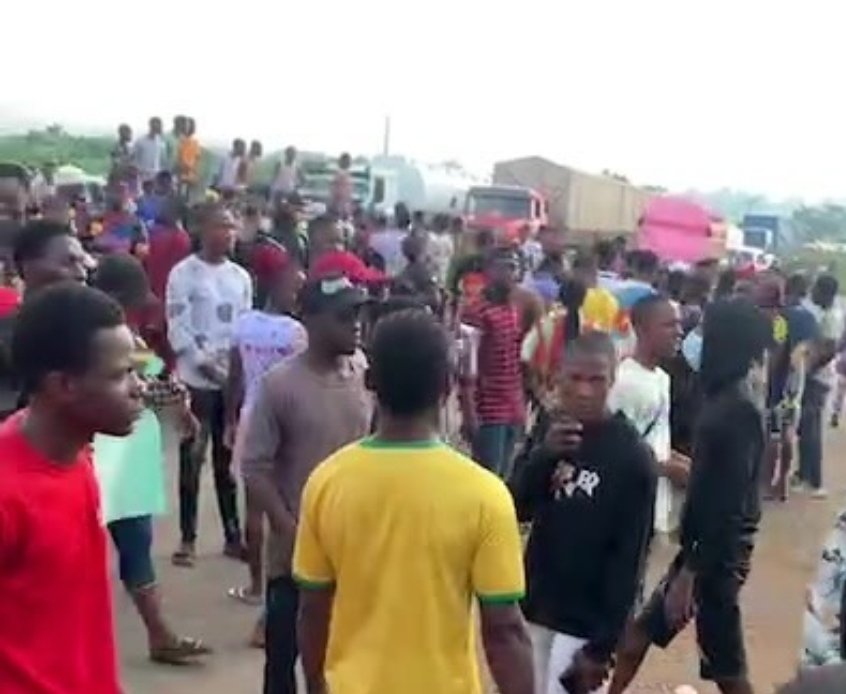 Protesting TASUED students
The Vice-Chancellor of Tai Solarin University, Ijagun, Ogun State, Prof Wole Banjo has intervened after soldiers stormed the university and arrested the school's SUG president and some others.
A new report has now revealed that Banjo visited the barracks of the Nigerian Army in Ilese to secure the release of some students arrested by soldiers on Thursday.
Prof. Banjo also confirmed the news on Friday, saying he was yet to know why the students were arrested by the soldiers.
Recall that the Students Union Government President in TASUED, Sodiq Ridwan, was arrested alongside many others on Thursday.
The Vice-Chancellor told DailyPost that, “I’m still at the barracks this morning, I just want to see those students that were arrested. So, immediately after seeing them maybe, I will call you back to give you the full details.
“We closed normally from the office without any issue yesterday, there was no security problem on the campus. We don’t even have any issues with the students. So, it was later in the day that we learnt that soldiers arrested some of the students.
“We are here at the barracks to find out exactly what happened. We are not relying on hearsays – what the students said and what anybody is talking about. We are here now to hear from the military officers what actually happened. After listening to them, we would be able to intervene in the matter. Those arrested are still with the military. We are making moves to get them released.”
Soldiers were said to have stopped some students riding in their cars to check their phones; this reportedly led to an altercation between the students and the military men on Thursday.
As the situation heated up, the SUG President was said to have arrived at the scene to wade into the matter, but he was arrested with other students.
On Friday morning, students took to the street to protest what they called “illegal arrest and detention” of their colleagues.
At the moment, two armoured personnel carriers have been stationed at Conoil filling station, along the Benin Ore highway, where the students are demonstrating.
The Ogun State Police Public Relations Officer, Abimbola Oyeyemi, confirmed the incident.
Oyeyemi said he could not give details of what led to the arrest of the students at the moment, adding, however, that policemen have been mobilised to forestall a breakdown of law and order.
Top Stories