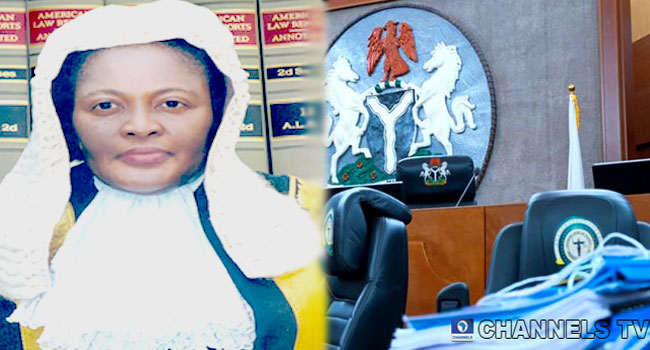 Justice Mary Odili
The Inspector General of Police, IGP Usman Alkali Baba has broken his silence over the invasion of the residence of Supreme Court Justice, Mary Odili.
The IGP said all those involved will be brought to book.
In a statement by Force spokesman, CP Frank Mba on Monday, the police boss disclosed that he has ordered detailed investigations into the reported siege on the Abuja residence of Justice Odili, an incident that occurred on Friday, 29th October 2021.
The IGP, who noted that the leadership of the Force is not aware and did not at any time order Police operatives to carry out such assignment, described the reported violation of the sanctity of the residence of the Justice of the Supreme Court as unfortunate and unacceptable.
Consequently, the IGP has directed the Force Intelligence Bureau (FIB) to conduct a discrete investigation into the incident. He assured of the Force’s commitment to the safety and security of the members of the judiciary and Nigerians in general.
He further called for calm, promising that the Force will do all within its powers to unravel the perpetrators and motives behind the breach with a view to bringing all indicted persons to book.
Meanwhile, the IGP has directed the Commissioner of Police, Federal Capital Territory (FCT) to strengthen security around the street and residence of Her Lordship, Justice Mary Odili JSC to ensure her safety and also to prevent a re-occurrence of the unfortunate incident.
The police chief assured that the details of the probe into the matter would be made public on the conclusion of investigations.
Top Stories