Speaking with SaharaReporters, the students said they were currently going through hell and at risk of being withdrawn from their respective institutions. 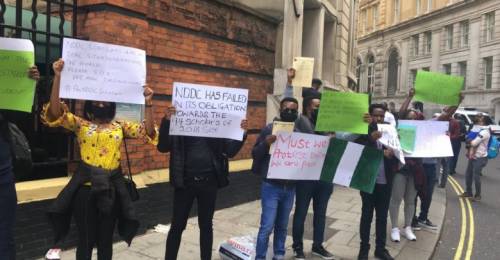 Some Nigerian students who were sponsored abroad in 2018 for further studies by the Niger Delta Development Commission (NDDC) have again lamented non-payment of their scholarship fees by the Nigerian government, according to SaharaReporters.

Speaking with SaharaReporters, the students said they were currently going through hell and at risk of being withdrawn from their respective institutions.

The students said despite sending different letters to President Muhammadu Buhari through the embassies, nothing has been done about the situation.

"Even after sending letters to President Buhari through embassies and copied to the Secretary to the Government of the Federation, we did not receive any response," one of them said.

"The impact of non-payment of tuition fees/upkeeps by NDDC on its 2018 and 2019 PhD scholars overseas has led to; some of its scholars being denied registration for the third and final year of their programme.

"Many of us have been denied access to school’s laboratory facilities which has resulted in paucity in our laboratory works and research for some of the scholars.

"Many of us now squat with some Nigerian and African students abroad because our landlords have driven them out due to defaults in the payment of rent. Many of us now literally hustle or patronise and live on the mercy of food banks houses to survive.

"One of us that were given a notification of deactivation of her student status by her school made calls and also wrote to NDDC about her situation all was to no avail. NDDC did not contact her school nor respond to the letter," another victim said.

The students wondered if the Nigerian government was waiting for when they would be withdrawn before realising the implications of not paying their tuition and upkeep fees.

"Is it when all the scholars are given withdrawal letter or contact COVID-19 19 NDDC will realise the impact of non-payment of our fees/upkeeps?" one of them queried.

In 2020, SaharaReporters reported that many scholars abroad were at risk of having their institutions terminate their academic programmes as the NDDC had refused to pay their tuition for about two years.

In August 2020, Buhari had given the NDDC one-week ultimatum to pay the scholars’ fees but the then interim management of the commission refused to issue the payment.

The NDDC had come under backlash on different occasions over its alleged maltreatment of students from the region.

Last month, the Niger Delta Students Union Government staged a protest against the commission amid agitation for the students' bursary payment and proper funding of the education sector in the region.