He was arrested after he confessed that he intended to steal the motorcycle as he was returning from Ipetumodu. 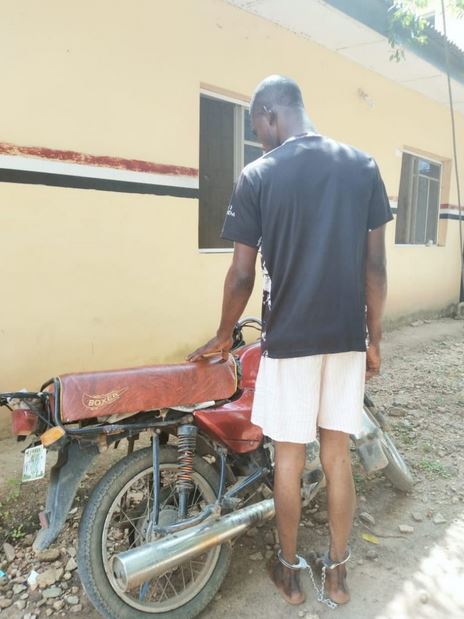 A 32-year-old man, Olapade Tunde has been arrested by the police for attempting to steal a motorcycle on November 4, 2021 at Akoda junction, Osun state.

According to the information contained in a press release made available by the Command’s Public Relations Officer, Daniel Adigun, Olapade who hails from Oke Compound, Osogbo, confessed that his intention was to steal the motorcycle as he was returning from Ipetumodu.

Adigun stated that the suspect confessed that he alighted at Akoda Area of Ede town when he sighted the motorcycle which was parked along the road.

The Osun NSCDC spokesperson explained that the case was reported at the NSCDC command headquarters and the corps was able to track and get the suspect arrested on November 10.

He said the suspect also confirmed to have perfected the act under the tutelage of a popular motorcycle snatcher whose name and address is unknown to him.

While noting that motorcycle snatching has taken a new dimension in recent times, he explained that the agency will unravel the syndicate involved in the nefarious business.