Some Cabals Have Taken Over Nigeria – Governor Ortom Raises Alarm


Ortom said those around the president have failed to inform him about the current security and economic challenges bedeviling the entire nation. 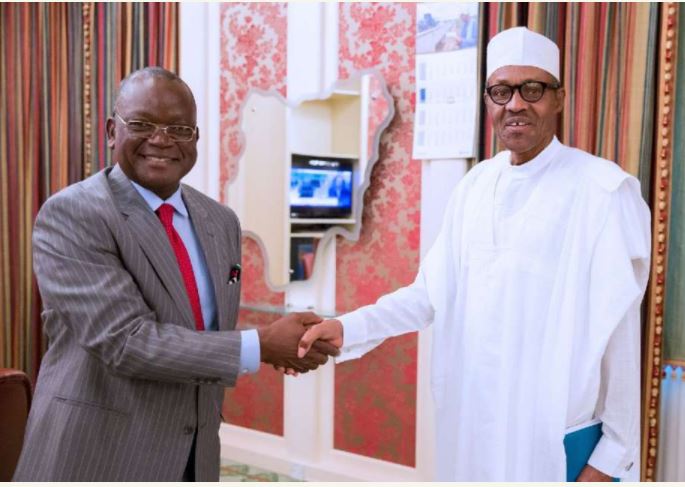 Governor Ortom and President Buhari
The Benue State Governor, Samuel Ortom has raised a serious alarm.
According to him, some persons at the Federal level have taken over the rulership of the country.
The Governor, during a press conference in Makurdi the State’s capital, said President Muhammadu Buhari had good intentions when he assumed office in 2015 but his intentions were hijacked by the cabals.
According to him, those around the president have failed to inform him about the current security and economic challenges bedeviling the entire nation.
Ortom, who said he believes in the unity of Nigeria, claimed that some citizens have been forced to remain silent on the state of the nation following intimidations, stating that he would always stand for the truth.
He said, “I know that Mr president intended well when he came into power in 2015 but some cabals have taken over the country, and they are dragging Nigeria to the mud.
“I’m not sure Mr president is aware of what is happening, if he was, I believe that he would have risen up to his responsibilities and take steps to correct what is happening.
“Many people who have been intimidated cannot speak, can’t open up even to advise the president. We are getting to the level that if nothing is done to redeem the situation we are in, the unknown gunmen, bandits will take over this country and we will be nowhere.
“For me, I am concerned as a Nigerian, as a patriotic person who believes in Nigeria as you can see the symbol of unity that I carry on my cap which I wear everywhere I go in this world. I believe in the unity of this country”.
Top Stories