Uzodinma stated that there is no reason why the APC should not be re-elected because President Muhammadu Buhari’s administration is doing well. 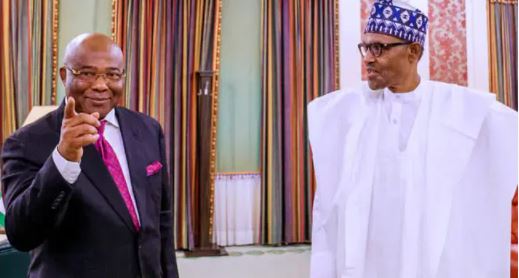 Uzodinma and Buhari
Imo State Governor Hope Uzodinma has boasted that his party, the All Progressives Congress will win the 2023 presidential election.
According to him, the reason is because President Muhammadu Buhari has done well.
He emphasized that the Buhari administration was able to steer Nigeria out of recession following the COVID-19 outbreak.
He made the announcement while speaking to State House Correspondents on Tuesday, following a meeting with Buhari.
The governor stated that because the APC controls the majority of the states and local governments in the country, it will return to power.
He noted that the ruling party has recorded an increase in its membership.
“What is the prevailing situation that will make APC not win? Is it that you don’t know that 22 states in the country belong to APC?
“Is it that you don’t know that out of the 774 local government areas in the country, that the APC is controlling the majority? Have you not seen the number of people decamping into the APC?
“The mood of the country is that the president is doing very well given the peculiarity of the times when insecurity has taken over the globe, where COVID-19 has ravaged every place in the world from one variant to another variant, yet we are able to come out from recession,” he said.
Noting that he is “very confident and proud member of the APC,” Uzodinma assured that the party would continue to do its best to “ensure that the confidence reposed in the party by Nigerians is not betrayed.”
Top Stories