The highly unusual case was revealed by paediatrician Michael Narvey, of Children’s Hospital Research Institute of Manitoba in Canada. 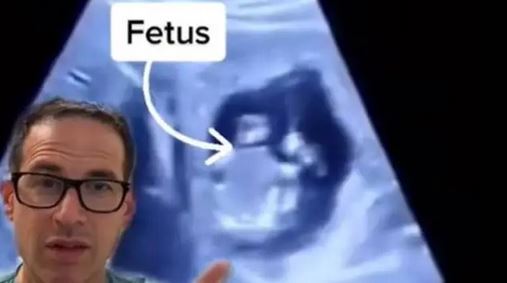 A woman had an ultrasound only for her to find out she had an ectopic pregnancy as the fetus was discovered growing inside her liver.

The ‘extremely rare’ case was revealed by paediatrician Michael Narvey, of Children’s Hospital Research Institute of Manitoba in Canada.

He detailed the highly unusual case via a TikTok account.

He said: “I thought I had seen it all – a 33-year-old woman comes in with a 14-day history of menstrual bleeding and 49 days since her last menstrual period

“What they find in the liver is this: a baby. She had an ectopic pregnancy in her liver.

“We see these sometimes in the abdomen but never in the liver. This is a first for me.”

The video has been viewed millions of times and has left people stunned.

One user said: “This must have been devastating news for the parents I hope mum is well and sorry for your loss.”

Another said: “I don’t even believe this can happen. How does a fertilised egg make it to the liver?”

An ectopic pregnancy happens when a fertilised egg implants itself outside of the womb, usually in one of the fallopian tubes.

The fallopian tubes are the tubes connecting the ovaries to the womb. If an egg gets stuck in them, it won’t develop into a baby and it’s not possible to save the pregnancy.