2023 Polls: Direct Primaries Will Give Power To The People - Bode George


George said this when he received convener of the Lagos4Lagos movement, Mr. Olajide Adediran fondly called Jandor and his supporters in Lagos. 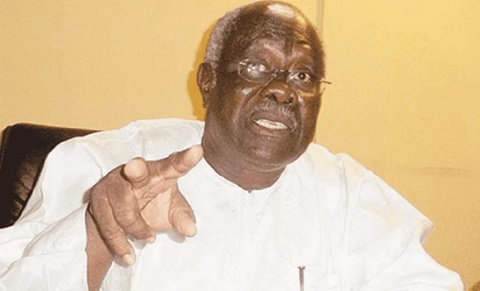 Bode George
Former Deputy National Chairman of the Peoples Democratic Party, PDP, Chief Bode George has said direct primaries will give power to the people.
He therefore called on President Muhammadu Buhari to assent the Electoral Act bill (amended).
He spoke on Thursday saying direct primaries will remove power from the back-room leaders and hand true power to the people.
According to Vanguard, George said this when he received convener of the Lagos4Lagos movement, Mr. Olajide Adediran fondly called Jandor and his supporters in Lagos.
He said: “At this juncture, as we will be entering a new season of campaign in the next few months, I will be remissed if I fail to mention the very pivotal new bill presently on the President’s table. The direct primary bill which was overwhelmingly passed by the House of Representatives and the Senate will not only deepen our democratic process, it will basically remove power from the back-room leaders and hand true power to the people. It is a great opportunity for President Muhammodu Buhari to ensure a great place for himself in the pantheon of our democratic heroes. He should sign this bill and the electronic transfer of result bill.”
INEC has already assured Nigerians that they are willing and capable to adopt these innovations. Mr. President must never lose this opportunity to reclaim the moral high ground in the history of our nation.
“Democracy is about the People’s will, the People’s voice, the collective participation in the guidance of the state. It is never about a privileged few determining the fate of the nation in some secret conclave. It is always about open, equitable involvement in governance.
“This may be our last opportunity to rebuild a genuine, fair and just nation that generations yet unborn will be proud of. Let Mr. President begin that process now. Let him lead this cause. History will be kind to him if he stands with the people. May the good Lord bless our nation and set us on the right path.”
On Jandor’s entry to the PDP, he said: “Here in Lagos, our party, the People’s Democratic Party, is welcoming a new infusion of massive decampees from the crumbling APC led by Mr. Abdulazeez Olajide Adediran popularly called Jandor.
“We welcome Mr. Adediran and his followers who have decided to abandon the sinking and the blighted ship of the APC for a renewed, energized, invigorated, forward looking PDP.
“Let it be known by all and sundry that the strength of all political parties reside precisely in their population.
“The more the merrier. A good political party does not turn people away. It embraces everyone who can contribute to the progress of the party.
“For those of us who are already in the People’s Democratic Party in Lagos, let us welcome the new entrants with warm, open embrace. They are coming to add values to our party.
“We know who the enemy is. We know those who are despoiling the riches of our state. We know the man who is carting away 9 billion naira every 30 days from our collective coffers.
“There is no need for unnecessary enmity. There is no need to feel threatened about our new members. We must work together to achieve victory. Everyone will be given a level playing ground to achieve their aspirations. Politics is always a game of number.
“We can only strengthen ourselves when we embrace and encourage those who are joining our team and sincerely work with them to take our state back from the prodigal mis-managers.
“I believe our people will troop out in their thousands to welcome Mr. Adediran and his followers when they make their official declaration in January.
“No one should feel threatened about the people who are joining us. The umbrella is big enough to give us all effective protection and salvaging refuge.”
In his remarks, Jandor promised to abide by the rules and regulations of the Lagos PDP.
Top Stories