The President’s SSA said on the phone that he had been diagnosed with the infection and was consequently advised to self-isolate. 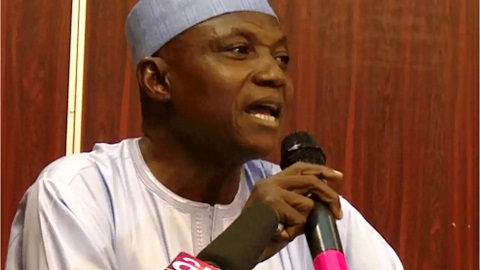 Garba Shehu
The Senior Special Assistant to the President on Media and Publicity, Mallam Garba Shehu has confirmed that he tested positive for COVID-19.
Shehu personally confirmed his health status yesterday.
According to him, he is currently in isolation.
This came as the authorities of the Federal Capital Territory Administration (FCTA) expressed worries over the refusal of many Abuja residents to adopt simple measures that offer protection against COVID-19.
The President’s SSA said on the phone that he had been diagnosed with the infection and was consequently advised to self-isolate.
He said he was taking the prescribed medication.
But he said he was unaware if any other State House official had been diagnosed with COVID-19
“What is true is that I know about myself that I’m self-isolating and taking my medication, but I know of no other case,” he said in reaction to a report by news blogger, Premium Times, that COVID-19 has hit several officials at the State House.
Information Minister Lai Mohammed, one of the government officials mentioned by Premium Times as having the virus, dismissed the report as fake news.
Mohammed said he was at the Presidential Villa on Wednesday, Thursday and Friday for different official engagements including the federal executive meeting and the swearing in of Mr. Muazu Sambo as new minister of state, works and housing, all of which were covered by the media.
“Does it make sense that I could be in self-isolation and attend those events for three consecutive days?” the minister asked when contacted by The Nation last night.
Top Stories