Bobrisky Finally Opens Up On Dating Mompha, Apologises to HIm Over Last Year's Fight (Video)


Recall that late last year, Bobrisky and Mompha who were once close friends, had a fight on social media. 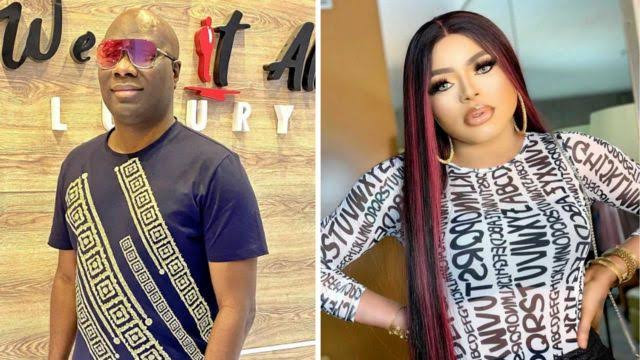 Mompha and Bobrisky
Crossdresser, Bobrisky has revealed that he never dated Dubai-based businessman, Mompha.
He also tendered an apology to him.
Recall that late last year, Bobrisky and Mompha who were once close friends, had a fight on social media after Bobrisky's former personal assistant Oye Kyme insinuated that they were lovers. Mompha got angry that Bobrisky did not immediately come out to debunk the claim.
They also had another spat in December last year after Bobrisky and Tonto had a dirty fight online.
After the fight, Mompha on December 23, shared photos of a lawsuit he filed against Bobrisky. He accused Bobrisky of not debunking Oye Kyme's claims about them being homosexual partners. He also accused Bobrisky of making a false claim of him borrowing his car each time he's in Nigeria. Mompha further alleged that the cross-dresser carried out a campaign to smear his name with an assertion of him being "an audio billionaire renting cars in Dubai for the gram".
Asides from asking Bobrisky to prove that he rents cars, Mompha demanded an apology which should be published in two newspapers within 7 days and N1bn as damages over the claims he described as "malicious".
Well, Bobrisky has now tendered a public apology to him. In it, Bobrisky said he wants to start 2022 in peace and would like to apologize to Mompha who had been good to him. He debunked claims that they dated. He also mentioned that Mompha can go ahead with the lawsuit if he wants to.
''Mompha is a great guy. He is an awesome guy. He is a perfect gentke man that I really respect so much. I can't really remember how myself and Mompha started but one thing I can remember is he is a great guy. Mompha has never judged me before. He is like a brother to me. He has been there. Even before I became so famous. Mompha has been there.
It's so wrong of me. I disrespected him and that is why I am doing this video to tell him I am sorry. A lot of people don't want to see me happy.
Mompha is a great guy. Me and Mompha we never, ever dated. Mompha is my brother.
Like I said, I messed up and that is why I am doing this video, to apologise to him that I am deeply sorry. I want him to forgive me. He can still go ahead with the suing. He can still sue me but I feel like it is 2022, I don't want to have issues with anybody.''
Watch the video of him apologising below:
Top Stories