The nurse, her husband, their child, her mother and two other children were returning from a wedding on Saturday, January 8, 2022, when they met their untimely deaths. 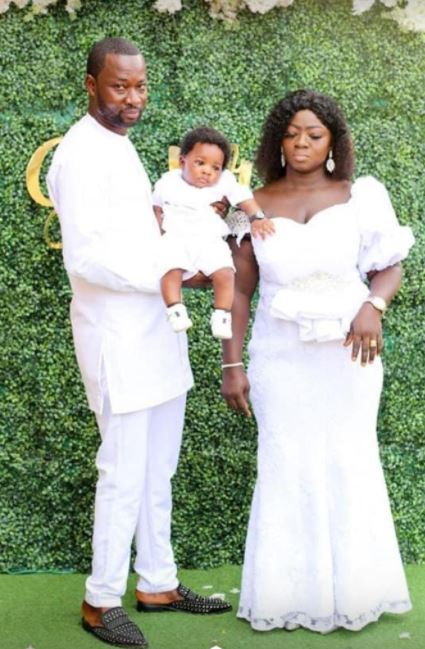 The deceased, Eunice Maame Fosua, her husband and child

A family of six have lost their lives after their vehicle plunged into a river on the Kumasi Nkawie Sefwi highways, Ghana.

The victims identified as Eunice Maame Fosua, her husband, their child, her mother and two other children were returning from a wedding on Saturday, January 8, 2022, when they met their untimely deaths.

According to reports, Eunice's husband had attempted an overtaking and saw another vehicle approaching him with equal speed.

In attempt to swerve, they landed in a nearby river and got drowned in the process.

"Yes the report on the accident has come to my attention. That six people have died in the Nkawie area. Investigation have commenced. I’m yet to received fact on the accident from my officers on the ground’’ he said.

"They attended the wedding of Eunice’s sister-in-law (that is her husband’s sister ).They were six (6) in the car and all of them couldn’t make it. Eunice, the husband, Eunice’s mother, their child and two other children.

They were returning from the wedding and they met their untimely deaths. The husband attempted an overtaking and saw another car coming.

In attempt to swerve they landed in a nearby river and got drowned."

"We entered a new year praying and hoping for the best, but it's unfortunate that just few days into it, I have been hit with such an unfortunate accident," he wrote.

"I have lost my lovely Sister and 4 family members whose presence I will forever miss, due to the important roles they played in my life. I can't believe this has happened to me. I'm weak, scared and sad. If only tears could bring the dead back!"

"I will miss you, my loved ones. And forever, you will have special places in my heart.

Till the day we meet in heaven, may God keep you safe for me. I will miss you" 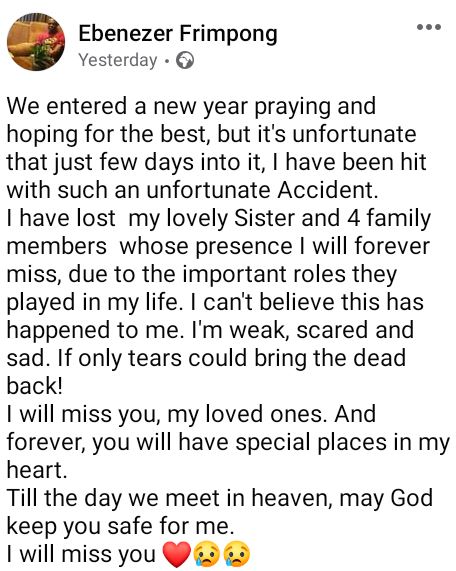