The man tells how he was allegedly ‘kidnapped’ by some policemen, who extorted N100,000 from him before letting him go. 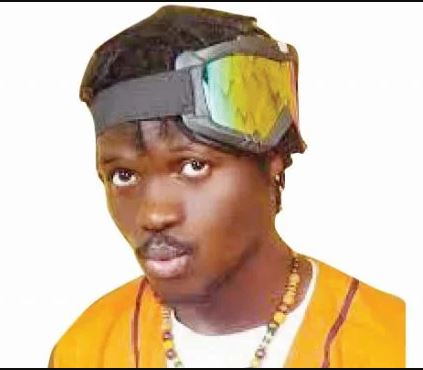 ﻿Eche Abraham, an ﻿Abuja-based artiste, aka Soundboi BME, tells GODFREY GEORGE how he was allegedly ‘kidnapped’ by some policemen, who extorted N100,000 from him before letting him go

My name is Eche Abraham, aka Soundboi BME. I am a musician based in Abuja.

A post you made, accusing some men of the Kogi Police Command of extortion went viral on social media during the week. How did this happen?

As you may know, I am an up-and-coming musician, and as a strategy to keep my name and face out there, I go to events and shows. I was invited to a show in Okene, Kogi State, and I set out on Sunday, March 13, 2022, for it. On my way from Abuja to Okene, very close to the Federal College of Education, some officers of the Special Weapons and Tactics Team overtook our car and packed right in front of us, almost causing a collision.

They asked all the passengers to get down, then singled me out and asked me to join them in their navy-blue Hilux van, which had no number plate. Initially refused but they slapped me and forced me into the vehicle. They took my phone from me and began to ask me all sorts of questions about what I do and all that. I told them I am a musician and was going for an event that I had already been paid for but they would not believe me.

They began to go through my phone. They looked through all the apps on my phone and were asking me if I was a Yahoo Boy (fraudster).

What did they say your offence was?

They didn’t say. They opened the Google Chrome app and some sex-related ads began to pop up, and they began to ask me who those white women there were. I was confused. I tried to explain to them but they refused to listen.

They also went through my mail and were asking me about the source of some mails in my box, but I told them they were promotional contents from Google and had nothing to do with me, but they would not believe me. I even told them to check all my social media accounts and see if I had any chat history with any foreigner. They checked and I came out clean.  They then said whether I liked it or not, I would pay them N250, 000.

Honestly, I don’t know. I told them I didn’t have any money. They opened my Binance app, where I do buy and sell cryptocurrency and asked me how come I had $23 inside. They then concluded and insisted that I must be a Yahoo Boy. I explained to them that Binance is not a fraudulent app; that the firm is even a sponsor of the current Nigerian Idol talent show.

Did they take you to the police station for further questioning since they suspected that you were a fraudster?

I was even the one begging them to take me to their station so they could further question me but they said no. They didn’t even allow me to make any call so people would come to help me. It was like I was kidnapped. All they were interested in was money. After much deliberation, they then agreed that they would accept N100, 000. All I had in my bank account at that time was N38, 000. They then told me to call anyone that would send me money if I wanted to leave. I began to call. They made sure they monitored the calls so I would not talk too much or tell anyone that I had been kidnapped by police officers. They also monitored my bank alert till the money got to N119, 000.

Did you transfer the money to them?

They then carried me to an isolated area. I began to beg them to please give me their account number so I could send them the N100, 000 they had demanded. They laughed and started insulting me in Hausa language. They said I wanted to implicate them with the evidence of transfer and that God would punish me. One said for what I said they wouldn’t even take the N100, 000 anymore, but the N250, 000 they initially demanded. I just kept pleading with them.

They then took me to a bushy area near Nollywood at Nagazi, where there was an abandoned filling station and said they wanted to interview me. I told them to take me to the police station and do the interview but they refused. They then began to force me to say things I didn’t intend to say.

We began searching for Point on Sale machines to make withdrawals. The first place they took me to, the attendant said she didn’t have up to N100, 000. They took me to the second one who hailed the officers very well. When I got to him and asked him if he knew them, he said they were his customers. I told him that I was being held hostage by these officers and had been accused of what I had no idea of but he didn’t say anything. He went ahead and withdrew the N100, 000 and I was also charged N1, 000 as the service charge for the transaction.

Did you report this matter to anyone?

I posted it on social media and told some of my big friends. I couldn’t go back to the POS stand the next day to meet the attendant because some of my performer friends had an accident so I had to go check them up at the hospital. That night, I couldn’t sleep. I kept wondering how I just lost N100, 000, just like that and how I could have just died like that if I hadn’t complied. The next day, I went to Inorere Junction, where the POS the withdrawal was made, to inform the attendant of what had happened and he told me that he already knew what was happening, which was why he kept mute when I told him that I was being kidnapped. He said the last time the men came to that POS stand, he told the victim to transfer the money to the officers but they insulted him, calling him a criminal. He said even their other office close to Kabba Police Station was not left out in their activities. He said if anything comes up, he was willing to testify. I even made a video while I was there, as evidence.

Did you report to the police station?

I went back to the Okene Divisional Police Station to report. I also told one of my friends who called some people he knew at the Force Headquarters and they took up the matter.  The Investigative Police Officers got a number of one of the officers who happened to be the leader of the gang who extorted me and asked if he worked around Okene with his men on March 13 and his answer was in the affirmative. He mentioned my case and asked them to quickly send that money back if they knew what was good for them. The Divisional Police Officer, when he heard of it, was so angry. He promised to get to the bottom of the case and also to detain the officers involved in the matter. The DPO also threatened the errant officers to return the money. When they tried to call them back, the number was busy. Perhaps, they were trying to contribute the money.

I am a graduate. If not for the state of this country where graduates are paid 20, 000, 30,000 as monthly salaries, I would have been working.

What are your demands?

I don’t like trouble. They should just give me my money and let me go. I am not a criminal. I am a legit hustler.