Halilu, while issuing the release warrant, called on parents to always monitor their children to avoid recurrence 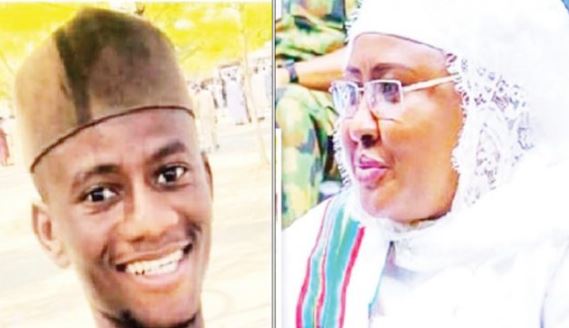 Aisha Buhari, the wife of the President, has bowed to pressure and has has withdrawn her case against Aminu Mohammed, a final-year student of the Federal University, Dutse, Jigawa State.

She withdrew he case following pressure and condemnation by activists, Amnesty International, the National Association of Nigerian Students, and other Nigerians.

The prosecution counsel, Fidelis Ogbobe, while withdrawing the case on behalf of Mrs Buhari, said the President’s wife, being the mother of the nation, decided to withdraw the case following the intervention of “well-meaning Nigerians”.

Moving a motion for the withdrawal of the case, Ogbobe cited Section 108 (2)(a) of the Administration of Criminal Justice Act. Justice Yusuf Halilu of the High Court of the Federal Capital Territory commended Mrs Buhari for withdrawing the case.

Halilu, while issuing the release warrant, called on parents to always monitor their children to avoid recurrence

The 24-year-old student had alleged in Hausa that the wife of the President was “feeding fat on poor people’s money”. It was reported that he was moved from Bauchi to Abuja on Aisha’s command and locked up.

Muhammad’s uncle, Shebu Azare, had, in an interview published by BBC Hausa, on Monday, said the victim’s father, Mallam Adamu, was not aware of his son’s arrest until five days later when the matter had escalated.

The matter had also generated a lot of reactions, with prominent Nigerians, including the presidential candidate of the African Action Congress, Omoyele Sowore, and other human rights activists calling for the student’s release.

According to a police report, Muhammed was arrested at Federal University Dutse on November 18, 2022, after the wife of the President instructed a team of police detectives to track him down.

The Presidency had also barred visitors from visiting inmates at the Suleja Correctional Centre, Niger State, following the arrest of Aminu.

One of our correspondents who visited the facility observed a heavy presence of security agents, with an inscription, “No Visitation,” at the entrance.

A security agent told Saturday PUNCH that there was an order from the Presidency barring all forms of visitation following Muhammed’s arrival at the facility.

“We can’t let you into the facility. No one is allowed to see Aminu. In fact, since he was brought in on Tuesday, no one has been allowed to visit inmates within the facility. You can read the note on the wall, no visitation is allowed, and I don’t want to lose my job,” he told one of our correspondents.

The officer, however, noted that the detained student lacked food since he arrived at the facility on Tuesday, adding that he only had N2,000 on him which spent, and could not afford to get food since no one was allowed to visit or call him.

The security agent added, “I feel for the boy; he arrived here with just N2,000, and it is finished. He complained of hunger today (Thursday), but there was nothing we could do since no one had been allowed to visit or call him. He only ate bread this morning.”