Atiku, His Father And Grandfather Are Not Nigerians - Buhari's Top Official Claims


A top government official in President Muhammadu Buhari's administration has claimed that Atiku, his father and grandfather are not from Nigeria. 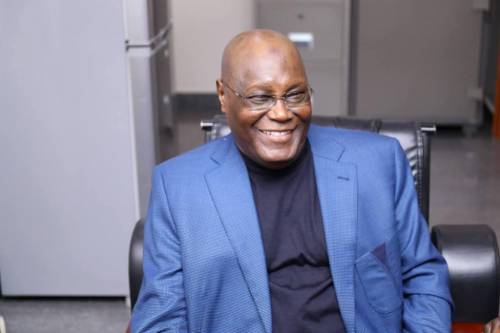 Atiku Abubakar
Abba Kyari, Chief of Staff to President Muhammadu Buhari on Tuesday told the Presidential Election Petition Tribunal that the presidential candidate of the PDP, Atiku Abubakar in the Feb.23 general election was a Cameroonian “flesh and blood’’.
Kyari, who was led through his deposition by Chief Wole Olanipekun, SAN, Counsel for the president, insisted that Jada, hometown of the former vice president was in Adamawa Province, an enclave that belonged to Northern Cameroon in 1946 when he (Atiku) was born.
He explained that Atiku was already born in 1946 before the plebiscite was conducted in 1961 to balkernize Nigeria and Cameroon where Jada which was part of Northern Cameroon voted to become Nigerian territory.
Kyari further said that the plebiscite also resulted in the Southern part of Cameroon officially aligning to becoming Cameroonian territory.
The witness therefore, said the French system of assimilation had compelled people of Jada, including Abubakar’s father and grandfather to be full Cameroonians in “flesh and blood’’.
On the status of Buhari Certificate, Kyari said he had personally gone to collect the Cambridge University West Africa Examination Certificate of the president on July 18 for further proof.
“I can confirm that I was the one that collected and signed the Cambridge University West Africa Examination Certificate on behalf of the president on July 18, 2019,’’ he said.
News Agency of Nigeria (NAN) reports that Buhari and his party, the All Progressive Congress (APC) had urged the tribunal to dismiss PDP’s petition for fielding a non-Nigerian to contest the presidential election.
They submitted that the Constitution had foreclosed the participation of non-Nigerians in the County’s election.
They further argued that it did not matter if the provision was not tested when Atiku was selected to be the country’s vice president.
The president and APC had therefore invited the tribunal to do the needful by dismissing all the allegations made by the petitioners against Buhari’s victory.
The respondents further submitted that it was inappropriate for a non-Nigerian to contest or challenge outcome of the Feb.23 presidential election.
Also testifying was Retired Gen. Paul Tarfa, who said Buhari was he enlisted with Buhari into the Officer Cadre of the Nigerian Army on April 16, 1962.
Tarfa explained that English Language was the medium of instruction, adding that Buhari had achieved an enviable record during the military training.
He listed some of their colleagues to include Brigadier Ola Oni, Maj:-Gen. Durojaye, Col. J.C Ojukwu, Late Brigadier Shelleng as well as Late Maj:-Gen Musa Yar-Adua.
He said the conduct of the promotional examination in the military was always done in the merit, adding that Buhari had always come out in flying colour.
On his part, Malam Suleman Mai-adua, Buhari’s classmate in Katsina Provincial Secondary School in his evidence in chief, said, they graduated from the school with Cambridge University West African Examination Certificate in 1961.
The witness, who came to court with a group photograph of the class six of 1961 set and their principal, was able to spot himself and Buhari in the picture.
Earlier, the tribunal admitted a total of 26 documentary evidence from the president through his counsel, Olanipekun.
NAN listed the some of the exhibits to be 19 Certified True Copies of Newspaper publications.
The respondent also tendered the APC Roadmap to a new Nigeria as evidence.
The others are: Cambridge Assessment International Education Certificate for Muhammadu Buhari obtained in 1961 and Receipt of the above document.
The tribunal also admitted as evidence, a Certified-True-Copy of Confidential Result sheet of the University of Cambridge West Africa School Certificate 1961 for Katsina Provincial Secondary School showing names of candidate who attended sat for the examination.
Another set of evidence included the class six group photograph of Katsina Provincial Secondary School taken in 1961 and news publication of June 22, 2015 of the above photograph.
Also tendered and admitted was the Curriculum Vitae of the second respondent (Buhari) which was duly signed by him.
Furthermore, the tribunal admitted a commendation letter on Buhari signed by the Commandant of the U.S. Army War College delivered to Lt:- Gen. Alani Akinrinade (Rtd) in June 1980.
However, Dr Livy Uzoukwu, SAN, Counsel for the Petitioners objected to the admissibility of the all the materials but had reserved reasons to the address stage.
Justice Mohammed Garba,  Chairman of the tribunal, thereafter adjourned proceedings until July 31 for continuation.
(NAN)
Top Stories