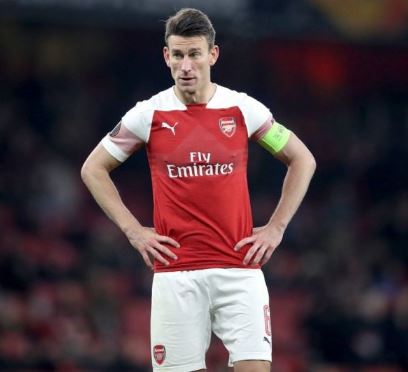 Laurent Koscielny
Arsenal are in talks with Rennes over a move for defender Laurent Koscielny, according to the Mirror.
The 33-year-old refused to join the Gunners on the club's pre-season tour of the USA as he looks to force a transfer back to his native France.
But Arsenal are still demanding a fee for the defender, and will not allow him to terminate his contract.
Barcelona winger Malcom has moved closer to joining Zenit St Petersburg after rejecting an offer from Everton, claim Sport.
The Russian club were able to offer a higher salary than the Toffees, with the clubs now close to a final agreement around the €45 million (£41m/$50m) mark.
The 22-year-old is also thought to have rejected an offer from a club in MLS.
Arsenal could have moved a step closer to one of their summer transfer targets after offering an improved deal for Celtic's Kieran Tierney, claim the Daily Mail.
The Gunners' previous offer of £25 million ($30m) was rejected and it seemed as though the move was dead in the water, but it may now have legs if Arsenal are willing to pay more of the fee upfront.
Tierney himself is reported to be keen on the move and the chance to test himself in the Premier League.
Leicester aren't budging when it comes to their prized defender
Manchester United's chase for Harry Maguire could go right up to the final day of the transfer window as Leicester refuse to budge on their £90 million ($109m) asking price, report the Telegraph.
Maguire is understood to be keen on the move but so far the clubs have been unable to come to an agreement on the fee, which would be a world record for a defender.
Leicester have said they will not stand in Maguire's way - as long as a bid comes in that matches their valuation.
Top Stories