He also talked about how he started out as a footballer and the resistance he got from his mother. 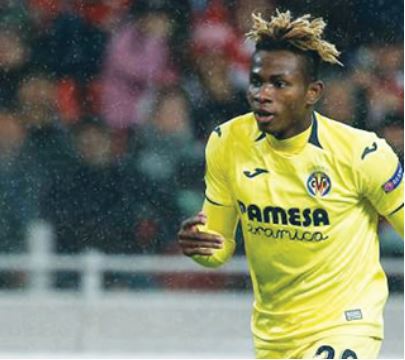 Samuel Chukwueze
Super Eagles forward, Samuel Chukwueze, has disclosed how much he loved former Nigeria captain, Jay-Jay Okocha while growing up.
According to the Villarreal forward, Okocha is his “big hero.”
“My big hero was Jay JayOkocha. I loved watching him, and whenever he played for Nigeria I would be so desperate to see him win. If they lost, I wouldn’t eat. I couldn’t take it,” Chukwueze told Goal.
“In my home town, we had a local centre and I would try to go there to watch Nigeria games. We didn’t have a TV, but there was one there. I would peep through the window to see Okocha and the rest.”
Chukwueze has been in great form since signing for the Yellow Submarines from Diamond Academy in Abuja.
He scored five goals and created two assists in 26 La Liga appearances last season. The young forward has also started the new 2019/20 season well, scoring one goal in three league appearances.
He also talked about how he started out as a footballer and the resistance he got from his mother.
According to him, his mother was eventually the same person who later encouraged him to follow his dreams.
“My mum always tried to stop me from playing football. I loved to play from a very young age but she would try to stop me.
She would make me stay in the house and focus on my studies.
“Sometimes, I would go to training and would return home late, and I knew I was going to get punished. They’d say I would have to sleep outside. My mum would say I couldn’t come inside the house!
“My uncle told me ‘Samuel, you need to stop playing this game and focus on school’ but I didn’t listen. Then, one day they burnt my boots! All my training gear, they burnt them so I couldn’t go. I stopped playing for a while, but one morning one of my friends told me there was a screening happening, where they were picking players to go to a tournament in Portugal.
“I told them I wasn’t interested because I knew my family wouldn’t allow me to go. He said he would come to my house but I begged him not to. I told him not to disturb my sleep, but he came around 6am.
“My mum, the person who doesn’t like football, who didn’t want me to play football, was the person who answered the door. She woke me up that morning, I was so surprised. She told me my friend was there to pick me up. I told her I wasn’t going and she was the one who said I should take my boots and leave the house! I was so surprised.
“The person who pushed me away from football was the one who pushed me to that screening. She said God had told her ‘You must allow this boy to play.’ I’m so glad for that.”
Top Stories