Shocking! How Police Officer Shot Laundryman In Lagos For Snatching His Colleague's Lover


A police officer has reportedly shot a laundryman in a Lagos community for snatching his colleague's lover. 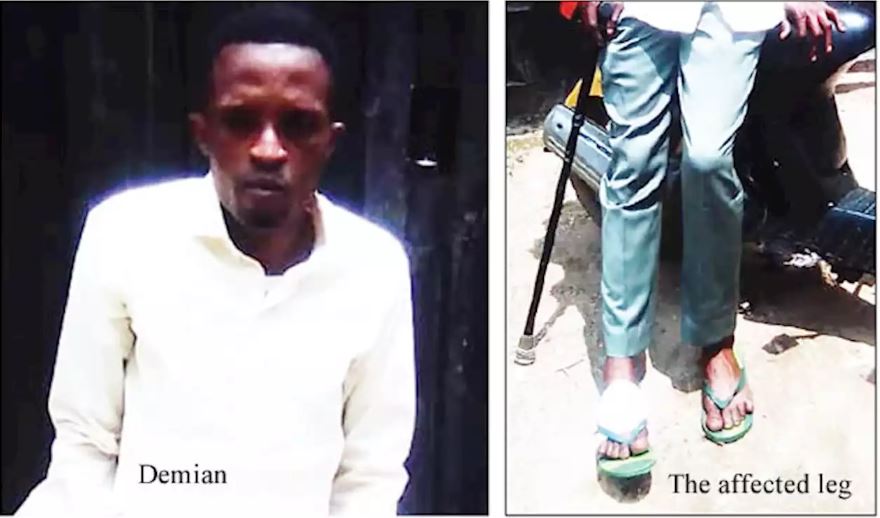 Blessing Demian, a Lagos-based laundryman, has demanded justice after he was allegedly shot in the leg by a policeman in the Oke-Afa, Isolo area of the state.

According to a report by Punch Metro, it was gathered that Demian was coming back from work on September 14 around 9.45pm when he was allegedly shot in his right leg by a policeman, Kenneth Kadire, of the Ejigbo Police Station, for allegedly marrying a woman, whom his colleague once had an affair with.

It was gathered that the woman, who allegedly had an affair with one of Kadire’s colleagues, left the officer to marry Demian, a decision that did not go down well with the cop.

Demian told Punch Metro that the cop shot him in the leg for refusing to refund the money that his colleague allegedly spent on the woman, adding that Kadire vowed to kill him.

He said, “I was coming back from work in Ago and going to Ejigbo on a scooter, which I use to collect clothes and deliver them when I was stopped by one of the policemen at a checkpoint by the Petrocam filling station at the turning leading to the Oke-Afa mass burial ground.

“Before I knew what was happening, he had pushed me into the police van and said I was an armed robber and shot at my leg and said that he would kill my wife and I and throw our bodies away.

“He said I ought to know that I should have returned the money that his colleague spent on my wife when they were dating and that if we did not pay the money, we would pay with our lives.

“When he fired the shot at me, some of the bullets hit a truck driver whom the policemen were trying to extort and one agbero, and before we knew what was happening, the policemen had disappeared.”

The 30-year-old, who noted that the Divisional Police Officer of the Ejigbo Police Station, where he reported the case, was furious with Kadire, added that although the station initially paid his medical bills, he was later abandoned.

He added that he had not been able to go to work since the incident and insisted on getting justice.

When contacted, the state Police Public Relations Officer, Bala Elkana said  Kadire would be punished for his professional misconduct.

He said, “The victim was taken care of by the DPO, but he is now demanding an outrageous amount of money from the force and the force cannot be held responsible for the action of the cop.

“It is a personal thing between him and the policeman; the force has no business with what happened between them; the policeman is an adult responsible for his action and the NPF cannot be held liable, because he did not act in his capacity as a policeman posted to work in a location, but pursued his personal agenda.

“Investigations showed that they both had personal grudges and the policeman is responsible for his action, but on our part, we have commenced the orderly room trial of the policeman, because he cannot hide under the cover of the NPF to misbehave.

“So, definitely, he will be punished for his professional misconduct and he will be handed over to the conventional court for him and the victim to continue with their matter.”