A 6-year-old has been reportedly raped, assaulted and tortured to death after a 14-year-old foster boy was left to babysit her and her siblings. 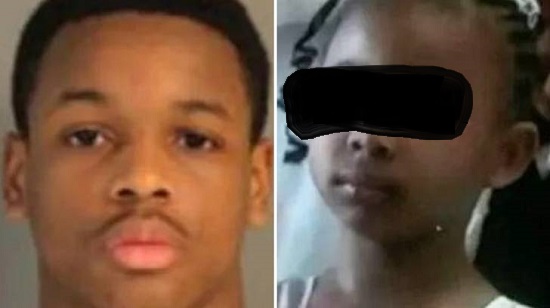 A teenage foster child reportedly raped and brutally tortured a six-year-old girl to death after being left to babysit.

Antonio Evans was 14 when he attacked little Destine King and her siblings, a seven year-old girl and nine year-old boy, in Memphis, Tennessee, in December 2015.

All three of his victims were also in foster care at the time of the attack.

Evans, who is now 18, admitted adult charges of second-degree murder and aggravated child abuse on Friday.

He was originally also charged with rape of a child under eight, although that charge was later dropped, with Evans now being caged for 30 years.

Evans reportedly punched, kicked, slapped and whipped his victims each day while his foster mother was at work.

The attacks left Destine vomiting and passing out after three days of vile abuse.

Police were called to the family’s home, with Destine taken to hospital, where she died five days later.

Little Destiny was found suffering injuries including a lacerated liver, pelvic bruising, bite marks on her back, a shoe print on her vagina and bleeding on her brain.

The surviving children told police that Evans had threatened to hurt them further if they told anyone about what he was doing to them.

The other youngsters suffered severe bruising on their faces and across their bodies.

Evans was being fostered by Destine’s foster mum's daughter at the time of the killing.

Her siblings were immediately removed from their home and placed in another foster home after being treated for their injuries.

Speaking at his daughter’s funeral, Destine’s devastated dad Trevin King told the Commercial Appeal: "I just miss her so much.

"We just had fun all the time and she was just so happy and wonderful."

Family friend Sherrie Lanahan added: "She was so full of life and we had so much fun.

"I just wanted to say how much we are going to miss her as part of the family for the short time that we got to be with her."