Meet Onyia, The Nigerian Activist Who Still Drives Himself At The Age Of 93 (Photo)


He may be a very old man at the moment, but Ogbueshi Onyia, a renowned Nigerian activist is still strong and kicking. 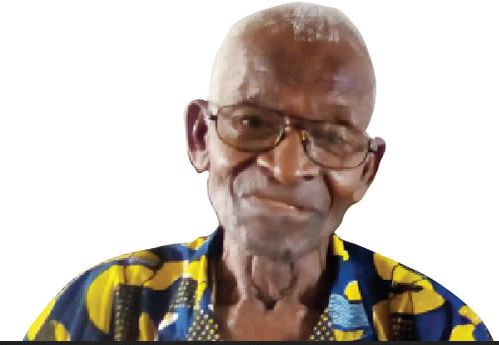 How did you know your date of birth?

My father was a headmaster and he had a register where all his children’s birthdays were written according to their ages.

He also had where the birthdays of his grandchildren were written and so on. My name was registered as the second son.

How would you describe your parents?

They were very good parents. My father J. I. G. Onyia (OFR) had five wives. He was an educationist and politician. He retired in Aba in present day Abia State as a headmaster. The colonialists found him worthy to take over the education office in Benin during the Nigerian Civil War. When the white people left because of the war, my father successfully handled the Ministry of Education of the Western Region but his office was in Benin.

My dad was very powerful in the National Council of Nigeria and the Cameroons. Nnamdi Azikiwe regularly came to my father’s house, so he became highly influential. Because he was a teacher, he wasn’t financially buoyant but he was eloquent. His people said they wanted him to represent them in the National Assembly because of his eloquence. My dad was nominated and eventually, he won.

When he won the election and went to Lagos, he met his colleague, Tafawa Balawa, who was a travelling teacher for northern schools in Jos, while my father was a travelling teacher for government schools, so they renewed their friendship. When Balewa became Nigeria’s Prime Minister, both of them worked together. He was also the Chairman of Asaba Urban Council District, which was visited by Chief Obafemi Awolowo.

What school did you attend?

In 1936, I started my primary education at Government School, Asaba. There, I did Standard One to Six. I left school in 1943. Three of my brothers and I wanted to enter college that year, but my father wondered how we expected him to send all his children out of Asaba. By 1944, it became a problem getting a secondary school and my father said one of his children had gone to college in Onitsha and the other one had gone to King’s College, Lagos. None was in Asaba then. In 1944, they founded St Augustine’s College in Asaba. Entrance examination was conducted and we were about 30 persons that passed the exam. And one Bishop A. P. J. relocated to Benin and we had our first year in a Catholic bookshop. Then Bishop Keren changed the name of the school to St Patrick’s College. Later, my uncle, Nzekwe Onyia, who studied pharmacy, sponsored by CMS in Lagos and was sent to CMS hospital in Ado-Ekiti, came to tell my father that he needed two persons from our family to train. My father agreed. He took me from my dad’s side and Sunday Onyia from the other side.

Two of us went with him to Ado-Ekiti. We found it difficult to get a school in Ado-Ekiti. After six months of going there, we started considering the option of coming back to Asaba. But there was a little problem – our mates we left were already in their second year at St Patrick’s College – they had gone ahead of us. When my uncle informed our father of the development, he asked him to send us to Aba as he (father) was already transferred to Government School, Aba, as headmaster. When we got to Aba, because we were already over-age, we decided to learn tailoring and driving. But along the line, my younger brother left while I stayed in Aba.

Later, when my father retired and joined politics, I continued to serve him. I was driving him everywhere he went. When he won election into the House of Representatives, I was carrying his bag and driving him to the House in Lagos in 1955. From the House of Representatives, he entered Senate and I continued to serve him. At the end of the war, he was appointed Minister for Navy; as a government official, he was given a personal driver. That was when I stopped driving him. By1960, we had come back to Asaba and I told him I wanted to find my way and get a job but he refused. Therefore, I ran away to Port Harcourt and stayed at Justice (Chukwudifu) Oputa’s house.

How were you able to cope, considering that your dad had many wives?

I was able to cope because my father was a fantastic man. The discipline I mentioned before that he had was a grand factor responsible for his family’s unity. He had five wives. He said he wanted a big family but he knew they (women) could destroy any family. He told his wives to stay behind and he that had the resources to train his children would be in the front while the children would follow. So, one of the systems he employed was to share the responsibility of cooking meals among his five wives.

The first wife would cook for the whole family for four days – from Eke to Orie (four market-day calendar). After four days, the second wife would take over. It rotated like that and on no account should any of the wives cook for their children alone.

With that, he was able to build the family with five wives that most people in our area believe, even till today, to have been the most peaceful family in the whole of Asaba. Therefore, it became easy for us (children) to cope with the large family.

How did your father inspire you?

I will be very ungrateful if I did not give him that credit. He instilled into us the value of punctuality, honesty and hard work.

How was life when you were growing up?

Life was not like it is today; the colonial masters were just showing us how they had developed to be our masters. Everybody was looking unto them.

When would you say you became a man of your own?

I started my own life late because I spent a substantial part of my life serving my father. I was already 36 years when I started working at United Africa Company. I still give thanks to God and UAC because they appreciated my contribution.

UAC did a lot to train me. I told you that I didn’t go to school but the courses I did in UAC made me what I am today. Once I returned from one, they sent me to another. They really gave me support and encouragement. Each time I go out and see their popular sausage I launched still on the road selling, I feel like a king. As you can see, I am still strong – nothing is wrong with me. I still drive, even at this age. However, I have been advised to slow down on driving.

How did you meet up your responsibilities at home, considering the nature of your job – always on the road?

Honestly, it was the life of discipline I learnt from my father that helped me. I never joked with my family because they would always come first. And I was grateful to UAC because they assisted me very well. Even till today, I am still receiving my pension.

What do you consider as a challenge for you now?

What I see as my challenge is the way the present generation is going about things. I pray to God to let this new fake life people live to go away; that’s only my worry. If you go to a family or village meeting, you will see children misbehaving; it is big challenge. Everything about some of them is false.

As someone who worked closely with your dad, how would describe politicians of those days?

When my father was in the legislature, they were not talking about themselves; they were talking about what to do to make Nigeria better. In Nigeria today, what a lawmaker earns is more than what the President of America earns. What do they do with the money? Does Nigerian money belong to them alone? Today, politicians are absolutely corrupt and selfish.

It is unfortunate that with the intelligent people Nigeria has, we are still at this stage. And they should have made the Southern and Northern protectorates to be separate entities; though Azikiwe and others who suffered to get us independence thought that with strength we could manage the hegemony. Unfortunately, it is getting out of control.

What is the secret of your longevity?

First and foremost, I am grateful to God. Secondly, one should be honest and truthful. I also understand giving as an integral part of living.

How did you meet your wife?

I was so disciplined to the extent that I didn’t have a girlfriend. When I ran to Port Harcourt, I met my wife in Oputa’s house. Oputa said her father was an uncle to his wife hence they sent her to her sister in Port Harcourt and we all lived in the same house. We met and fell in love there.

What attracted her to you?

Her beauty and sharp mind attracted me to her but I don’t know what attracted her to me because as of that time, I wasn’t working at that time.

What are your hobbies?

I played football when I was in college and I enjoyed it a lot. I paid money to watch matches at the stadium. When I was in Lagos, I took my children to the stadium to watch football matches.

I read newspapers every day. I also follow BBC and CNN news but electricity is our problem here – the power supply in Asaba is unstable.

What is your favourite food?

I love beans and tea.

How many titles do you have?

I have Ogbueshi title but I don’t have titles like my dad. He was given a Nigerian title of OFR (Officer of the Order of the Federal Republic) by the government. He was given Ogbueshi and Eze titles. These ones are the ones I can remember now, including the one given to him by colonial masters. He was not a Christian, but I am.