Since then, Ziyech has been on the radar of top European teams, including Arsenal and rivals Tottenham Hotspur. 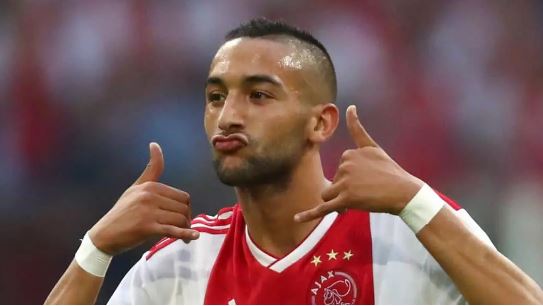 Arsenal’s hopes of signing Hakim Ziyech from Ajax have been handed a boost, after the player has been told he can leave this month, CalcioMercato reports.

The 26-year-old caught the eye, as the Dutch side dazzled their way to the Champions League semi-finals last season.

It was a run that saw Ziyech score 21 goals and register 18 assists across all competitions.

Since then, Ziyech has been on the radar of top European teams, including Arsenal and rivals Tottenham Hotspur.

The Moroccan snubbed a move to Sevilla last year, but the club has now given him green light to depart, if his asking price of £42.5million is met.

“I feel at home here and get to play a lot.

“I think Sevilla is from the same level as Ajax and I don’t switch Ajax for nothing.

“The right club didn’t make an offer yet, so for now I just stick with Ajax and do my very best on the field.

“I think everybody gets along really well. It’s a great team. We have fun and you shouldn’t give that up for nothing. You shouldn’t leave because of leaving; it has to be something you fully approve.

“Like I always said: it has to be the perfect picture. Everything needs to be right. I won’t leave Ajax until I have that feeling,” Ziyech told Fox Sports following Ajax’s 2-0 win over PSV in the Dutch Super Cup.