A bar owner has found himself in serious trouble after stabbing a footballer to death in Lagos. 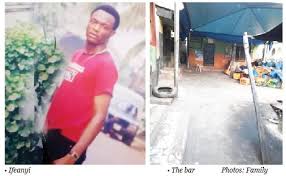 Footballer stabbed to death by a bar owner
A 36-year-old footballer, Ifeanyi Uchendu has died in a painful manner after being stabbed to death by a bar owner, Dennis Obiora.
The sad incident happened in the Alausa, Ikeja area of Lagos State.
According to PUNCH Metro, the incident happened after Ifeanyi and a friend, identified simply as Chinedu, were drinking at the Dorbazini Bar, Alausa, when the latter started smoking a substance suspected to be Indian hemp.
Immediately the salesgirl at the bar spotted Chinedu, she reportedly cautioned him.
When he refused to heed her warning, she called the bar owner, Obiora, and informed him about the situation.
The two men were said to have exchanged words, as Chinedu reportedly claimed he was not smoking on the bar’s premises.
The argument was said to have degenerated to a fight between them.
Ifeanyi, in a bid to settle the disagreement, intervened, as Chinedu was taken to a shop in the area.
A witness, Ganiu Olayemi, said when Obiora could no longer see Chinedu, he confronted Ifeanyi for allowing his friend to escape.
The bar owner was alleged to have stabbed the victim in the chest.
Olayemi said efforts to rescue the 36-year-old proved abortive, as he died before he could get to hospital.
“After Chinedu was dragged away, Obiora started looking for him. Ifeanyi stepped in and pleaded with him to stop the fight.
“But Obiora said, ‘it was you that allowed him to run away.’ In the process, he stabbed him three times. Ifeanyi fell.
“People brought a tricycle and tried to rush him to a hospital. But when they discovered that he was already dead, they turned back and dumped the corpse in front of the bar,” he added.
PUNCH Metro gathered that after Obiora attempted to escape but was held down by a mob.
Footage of the incident showed sympathisers lamenting Ifeanyi’s death, as they carried his corpse.
The victim’s elder brother, Jasper, while demanding justice, said Obiora killed him for no just cause.
The Abia State indigene said, “An eyewitness called to inform me that my brother had been stabbed to death for separating a fight. When I asked who stabbed him, the caller said it was Obiora.
“He had threatened to deal with my brother before. There was a time he saw me on the street and told me that he would deal with Ifeanyi because he took drinks worth N500 from his bar and had yet to pay him.
“Policemen from the Alausa division arrested Obiora and the remains of my brother were also taken away. I want justice. My brother was a promising footballer, but Obiora ended his dreams and career.”
The Lagos State Police Public Relations Officer, Bala Elkana, who confirmed the incident, said the Commissioner of Police, Hakeem Odumosu, had ordered the transfer of the case to the State Criminal Investigation and Intelligence Department, Yaba, for further investigation.
Elkana said, “The initial report is a bit different from the details that are coming in now.
“However, because the offence is capital in nature, it is not within the purview of the Alausa division to investigate further.
“So, the Commissioner of Police has ordered the State Criminal Investigation and Intelligence Department to investigate the case so that all eyewitnesses’ accounts could be taken.
“An autopsy will be carried out to show the real cause of death and investigation will show what actually happened. It is after that is done that I can give a proper report on the case.”
Top Stories