A man who survived after being infected with coronavirus has revealed the drug he took and recovered. 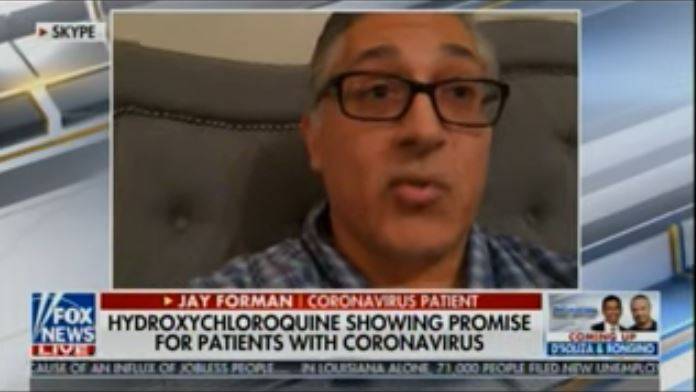 Jay Forman
A man from the United States has revealed the drug he used and recovered from the deadly coronavirus.
Recall that coronavirus has killed thousands and over 300,000 cases are being treated all over the world.
The man identified as Jay Forman revealed that he has completely recovered after using a drug called hydroxychloroquine.
He revealed this in an interview with Fox News.
He stated that he was forced to visit the hospital on the 16th of March after noticing symptoms of the coronavirus.
He explained that he had fever, cough and after doctor told him to take Motrin, but it didn't make him well.
His health deteriorated by March 20 as he experienced high temperature of 103 degree. He also had severe cough and shortness of breathe.
On March 21st, he was given hydroxychloroquine and a Z-Pak at the hospital and after four days, he recovered.
Video credit: Fox News:
Top Stories