A man who had the nerve to marry two women on the very same day in Nasarawa has opened up on what gave him courage to do so. 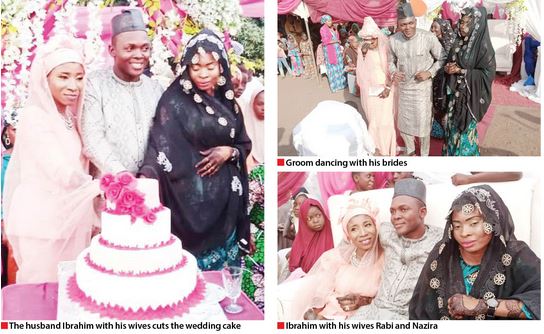 Speaking exclusively to Daily Trust Saturday, he said, “I am an orphan, self made farmer and now a councilor. As an orphan, I took up farming and school seriously. I made it in farming as I was able to take care of my mother and myself. I later won election to represent my ward.”

He said that when many people heard he was planning to marry two wives on the same day, they wondered if he was a prince or son of a very rich man, but they were told he was a farmer.

He further said, “I earned respect as a commercial farmer. I took farming more seriously than any other thing. Through farming, I earn a living and mingle freely with people.”

He said the most confusing challenge he had about his plan to marry two wives on the same day was how to inform his mother. But when he finally informed her, she asked if it was acceptable in Islam, his religion. She later enquired from imams and they told her that it is acceptable, so she gave her blessing.

Asked how he met his brides, Oboshi said, “I started courting Nazira in our town, Keana. She is kind and prayerful, so we kept planning for our future,’’ adding that he is really in love with her.

Also, when he went to Obi Local Government Area, he saw Rabi and spoke to her and she accepted his proposal.

He said when he told Nazira that he met another young woman and was planning to marry her as well, she did not object; rather, she prayed that it would be a blessing to them.

He also told Rabi that he wanted to marry her and another young woman on the same day and she said she was ready if he was serious. According to him, it was at that point that he had a rest of mind and started planning to marry them on the same day.

He said people kept wondering if he was serious about his intention until he printed pre-wedding pictures with the two would-be brides.

Oboshi said that because of his good reputation, parents of the brides did not query his plan to marry their daughters on the same day.

He said he was told that before he was born, two people in the town had married two women on the same date; hence his own marriage became the third.

The first wedding fatiha with Nazira took place at Abawa compound in the Amiri area of Keana by 10am while the second one was conducted at the residence of Alhaji Ishaku Akose in the Odobu area of Obi Local Government at noon.

Subsequently, the combined wedding reception took place in front of the palace of the traditional ruler of the town, the Osana of Keana, with the groom sitting between his brides.

Oboshi explained that though both wives moved to his house the same day, Nazira is the senior.

Speaking on the number of guests he recorded during the events he said, “Many people who were invited from distant places did not attend because of the restriction of movement due to the cononavirus pandemic. But relatives and people of goodwill attended.

“I am praying that the pandemic would not come to Nasarawa State. Also, let God provide the cure and bring it to an end.”

When contacted, the chairman of Keana Local Government, Alhaji Adamu Adigizi, did not comment on the wedding as he did not pick calls to his phone.

But the member representing Keana in the House of Representatives, the Awe da Doma, Alhaji Abubakar Nalaraba said, “I want Ibrahim to know that he has now graduated to another level, where he has to lead with more wisdom. He is not only a married man but a very responsible person who is to judge between himself and two women. He should ensure that there is peace in his house always.”

The two wives said they were happy to be married with the man they love and that they would do all they could to make him happy.