There have been overwhelming complaints by residents over how hoodlums have been dispossessing them of their valuables day and night. 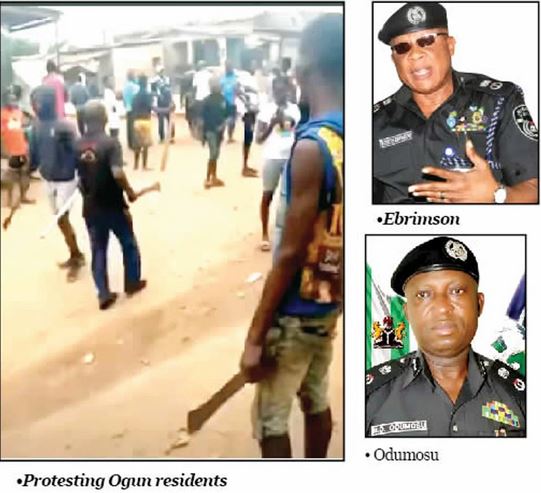 Residents of some communities in Ogun and Lagos have lost sleep over robberies in the neighbourhoods by a gang of roaming hoodlums seizing the coronavirus lockdown to unleash terror on the two states.

There have been overwhelming complaints by residents of Owode, Ilepa, Ifo, Arigbajo, Itori, Dalemo, Ijoko, Ogba Ayo, Mosa, Joju, Sango, Ota, Oniyale among other communities in Ifo and Ado-Odo Ota local government areas of Ogun State over how hoodlums have been dispossessing them of their valuables day and night.

There was also unrest in FESTAC Town, Jankara and Ifako-Ijaiye areas of Lagos State on Saturday afternoon as hoodlums besieged the populated areas to rob residents and loot shops.

The incidents have marred the 14-day lockdown order of the President, Major General Muhammadu Buhari (retd.), to contain the spread of COVID-19 in the two states.

Sunday PUNCH had reported that a gang led by an ex-convict identified simply as Felix aka Confidence, sacked a police checkpoint in Dalemo, Ogun State on Tuesday and robbed residents.

Although a reinforcement team later dispersed the robbers, it was gathered that they struck again around 10pm on Friday at Agbado Crossing and Randle in the Ifo Local Government Area of Ogun State.

Many residents said they had resorted to keeping vigils and making bonfires to secure their communities from the hoodlums which they said numbered about 200.

Sources told our correspondent that the hoodlums are always armed with cutlasses and locally made guns while striking in droves.

A resident of Ijoko, Sanni Rabiu, said, “I couldn’t sleep till morning for two days now.”

In what he described as ‘sinister effects of COVID-19,’ another resident, Opeyemi Johnson, said thugs had become thieves and called on security personnel to act fast.

“I was outside our gate almost all night with fume-stricken bonfires,” he added.

“We need help in Ogun State. People are being robbed not only at night but in the afternoon too. Ijoko, Ifo, Sango and the likes have been under robbery attack since this (last) week. We can’t sleep; residents take turn to do vigilantes,” a youth, who spoke on condition of anonymity, said.

Outcries of residents within the troubled communities have also flooded the social media, calling out police authorities with the hashtag, ‘#Ogununrest.’

“The people of Sango Ota, Owode, Ilepa, Ifo, Arigbajo, Itori, Dalemo, Ijoko, Ogba Ayo, Mosa can no longer sleep or be at peace because of incessant armed robbery every day even (in) broad daylight. They are ransacking house to house. I am a victim this afternoon. Help,” one Prince Afolarin twitted on Saturday.

@Okikiola_pr said staying home amid the lockdown was no longer safe, adding that landlords and youths now come out at night to safeguard their homes against robbery.

“What is the Lagos and Ogun state governments doing about perpetual armed robbery going on between Abule-Egba all the way to Ifo? We don’t sleep at night since the start of the lockdown. All those toll gate boys have been looting shops and houses,” one Lawrence Hortons wrote.

“In my hood, Sango Ota, Agbado, Owode, Ilepa, Ifo, Arigbajo, Itori can no longer be at peace because of incessant armed robbery every night. CP Ebrimson should take action as boys prepared for war against criminals,” he said.

Sunday PUNCH also gathered that some shops in Jankara Market in the Ifako Ijaiye Local Government Area of Lagos State were looted by hoodlums while some residents of FESTAC Town were robbed.

“Currently, Festac Town is on a heavy shelling by the men of the underworld. This is scary particularly in broad daylight,” one Korede Abdullah raised the alarm on Facebook on Saturday.

The Lagos State Police Public Relations Officer, DSP Bala Elkana, in a statement on Saturday, said Special Strike Force on Social Miscreants and tactical teams had been deployed in different parts of Lagos State to tackle the menace, adding that 36 six suspects had been arrested.

He said, “The Commissioner of Police Lagos State Command, CP Hakeem Odumosu, has ordered the immediate deployment of operatives of the command’s Special Strike Force on Social Miscreants, Special Anti Robbery Squad, Anti Cultism Squad and Raiders to various parts of Lagos State to support the efforts of area commands and divisional patrol teams already deployed to tackle the menace of social miscreants and violent crimes such as robbery perpetrated by hoodlums.

“Operatives of the Command’s Rapid Response Squad are positioned in strategic locations to promptly respond to distress calls. Patrols are intensified around markets and stores to prevent hoodlums from stealing and looting. Patrol teams are equally deployed in various communities and streets.

“Nine suspects were arrested along Abule Egba and Ifako Ijaiye areas after operatives of Lagos State Command successfully foiled a robbery attempt on residents in communities under neighbouring Ogun State. Investigation is ongoing. The suspects will soon be charged.”

Elkana said operatives also responded to a distress call on Burma/Creek Road Apapa, where seven gangsters engaging in supremacy battle in the area were arrested.

“There mission was mainly to steal and loot under the guise of supremacy battle,” he added.

The police spokesperson in Ogun State, DSP Abimbola Oyeyemi, could not be reached on his mobile for comment on Saturday.

Abimbola had in a statement on Friday said the Ifo crisis was supremacy battle between two rival cult groups which degenerated into robbery and other criminal activities, adding that police teams had been drafted to the area for ‘aggressive patrol.’

The statement read in part, “Their efforts yielded positive results as five of the hoodlums were apprehended in the Ijako area of Sango Ota. The patrol teams also moved to the Winners Church area along Idiroko Road where another suspect was arrested with a brand new locally-made short gun loaded with five live cartridges and assorted charms.

“Also, the operatives extended their operation to Araromi community in Agbado where three other suspects were arrested with a face mask and assorted charms.

“Earlier, 10 of the hoodlums have been picked up at various locations in Ifo, Kajola and Ososun areas of Ifo Local Government Area by SARS operatives.”