A heartbroken Nigerian woman has spoken about how her two children were stolen from her by kidnappers. 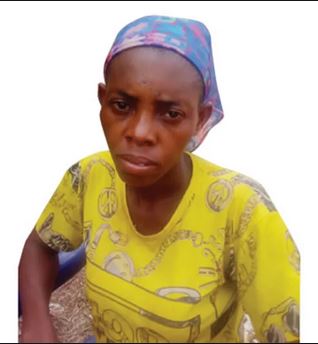 Two children belonging to Mrs Janet Nwankwo, who are 10 and two years old respectively, were allegedly kidnapped on April 8, 2020 in their compound by a woman and her supposed brother. The 10-year-old has been found but the other child is still missing. Janet tells RAPHAEL EDE how it happened

How were two of your sons kidnapped?

I left the church to go to the market to get some food items as I’m a food vendor. When I got home and was preparing to go to the market, a lady approached me and said her brother could not find his vehicle and that they needed a pastor that could pray for them. So, I decided to lead them to my husband’s church but on the way, she said she could not go again. When I asked why, she said she wore a pair of trousers and could not go to the church dressed like that. She told me she would wait for me to return from the market. Earlier, my little son was crying and his brother was there and I returned to the house to calm him down. They followed me and I used the opportunity to show them my house. So, I left for the market and returned around 6pm.

I heard that shortly after I left, they returned to my house and told my elder son that I wanted him to come and get what I brought from the market. That was how they kidnapped my children. Thank God the elder one has been rescued but my little boy, who is only two years old, is still missing.

Have you heard any news about your missing son?

No, but I still believe that with God, there is nothing impossible.

Did you know the lady and his supposed brother in the neighbourhood?

No, I never saw them before. I was on the road when she tried to talk to me and I stopped to listen to her. I wanted to take them to my husband in church but I think it was when they saw my children that they said they would not go again and I didn’t know they were after my children.

When did you notice that your children had been kidnapped?

When I returned from the market, I went to the church to do some work. Then my husband came to the church and asked me where my children were. I was irritated and asked what kind of question was that because I was confident that they would be at home. I quickly walked home with the items I bought from the market. I couldn’t find my children when I got home and our neighbours told me that a lady came to take them. Then I remembered the lady and her supposed brother and I started crying.

Did you have a premonition that something like that could happen?

Few weeks ago, I dreamt that my little boy fell into a pit and I jumped to rescue him. Then I woke up. I told my husband about the dream and we prayed immediately to ward off any danger. And we prayed that the dream should not come true before this incident occurred. Also, my sister living in my neighbourhood had told me that she had a bad dream about that my missing child. She advised me to pray very well. She said she saw that a native doctor carried him in her dream.

On Saturday, April 4, 2020, before the incident, I was very weak and could not do anything. I managed to go out around 1:30pm to cook the food I sold that day. However, I still have trust in God that my son will one day be found and reunited with us.