A 70-year-old Nigerian man whose 68-year-old wife recently gave birth to twins has told their story. 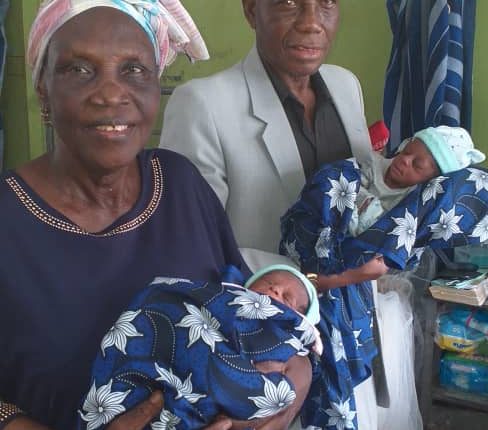 The Adenugas after successful delivery of their twins
After his wife who is 68-year-old gave birth to a set of twins through the In-vitro Fertilisation (IVF), the man has narrated the journey how they finally succeeded with the fruit of the womb.
According to Mr. Noah Adenuga, 70, he and his wife spent fortunes for 43 years and travelling everywhere up to the United Kingdom looking for the fruit of the womb.
The woman, Mrs Margaret Adenuga was delivered of a set of twins, a male and female by doctors at the Lagos University Teaching Hospital (LUTH), Idi Araba, Lagos State, on April 14.
The husband, Mr Noah Adenuga, who is 70 years old, told the British Broadcasting Corporation (BBC) that after spending a lot of money and travelling to a lot of places, they decided that they would continue to have faith in the Lord to have their own children.
Mr Adenuga said, when they decided to undergo the IVF process, some doctors described the act as reckless, wondering how a 68-year-old woman could expect to achieve result through the process, but this did not deter him and his wife.
He said his wife went through three unsuccessful IVF procedures before eventually conceiving and she was mostly managed by Dr Adeyemi Okunowo of the hospital until she gave birth through Caesarean Section in the hospital.
According to Mr Adenuga, “it took 43 years and three unsuccessful IVF procedures before conceiving the babies. Our search for children took us to the United Kingdom and back to Nigeria without success but our faith kept us going through the years of childlessness.
“I received messages from a group of fertility doctors who called our decision to go through IVF reckless. I told them that the decision was private and not their concern.”
Dr Adeyemi Okunowo called the birth “a miracle” but was also quick to point that the couple took a huge risk going ahead with the pregnancy due to their age.
The hospital management said it wouldn’t have conducted the IVF on the 68-year-old due to her age and had only admitted her because it was a medical responsibility.
Top Stories