The highly revered monarch, Ooni of Ife has fumigated Ile-Ife and is set to donate fumigators to different states. 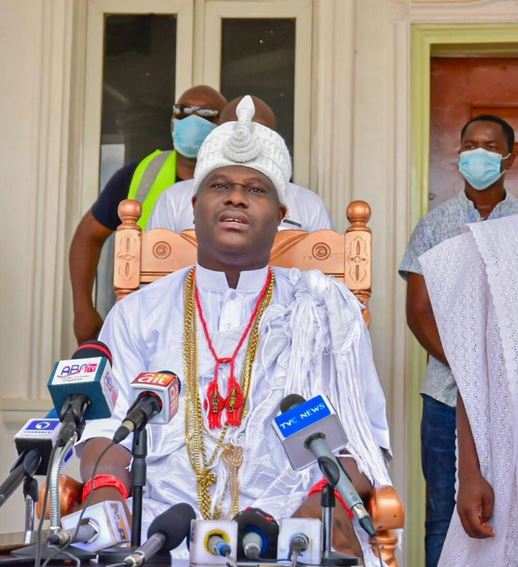 According to Sun News, the Ooni of Ife Oba Adeyeye Ogunwusi on Tuesday fumigated Ile-Ife and its environs with newly invented locally made fumigators and drones as a part of proactive measures to battle the coronavirus pandemic ravaging the world.

The monarch stressed that the magnitude with which the pandemic had been crippling the globe called for deployment of creativities especially among the youth to checkmate the malady.

He expressed readiness to donate two of the fumigators to each of the states of the federation which will amount to about N144m as his own way of supporting them and the Federal Government just as he has been sharing food and sanitizing items to the people, especially the less privileged on daily basis.

The equipment was sourced within the country and assembled at the palace of the Ooni by a group of youth engineers to fabricate the fumigators under the tutelage of the Head of Machines and Tools Department at the Ooni’s Palace, Mr Victor Badejo.

Each of the fumigators costs between N1.5 and N2 million.

He added that the innovation of the fumigators was akin to thinking outside the box like the days of the Second World War for Volkswagen and also Morris minor cars inventions.

“The art of being creative is the motivation behind the creation of these fumigators. Volkswagen which is currently being used across the world was discovered by the Germans during the Second World War and look at what it is today,” he noted.

The Ooni said that the fumigators would also serve other purposes after the COVID-19.

“This motorized fumigator is equally a product of necessity which could serve other purposes like agricultural and industrial sectors after this challenging period of COVID-19 pandemic. Right now, we need abundant fumigations and that is why we have partnered with drones’ suppliers as to widen our coverage,” the monarch stressed.

He explained that the fumigators were designed with equal fumigation capacity as industrial fumigation trucks used in China, Pakistan and some Western countries with a wide fumigation coverage of about 20 to 30fts radius.

“It is also effective during dry seasons as anti-dust suppressing machines because it generates only foggy substance converted from liquid, noting that nobody had the technology for fumigation like this in Nigeria currently.

“Aside from its cost-effectiveness, it is easy to assemble and dissemble on any locomotive engine for mobility. We have test run the fabricated equipment very well and we have seen its workability and need to roll out these products for public use.”

Badejo explained that the modular fumigator had countless potentials, including the provision of employment for Nigerian youths.

“If you look at the current situation, you would see that we are facing a great difficulty which has, among other disadvantages, locked us down. This means that we must look inward for a solution and bounce back stronger,” he noted.

“These equipment were sourced from within the country and assembled within the palace of the Ooni. It is flexible, durable and simple to use. In order to expand the fumigation, the Ooni approved our request to partner with FTS Drones for the supply of the equipment,” he said.

Also, a consultant with the World Head Organization (WHO), Professor Olapeju Esimai, who is also the current Head of Department, Public Health, Obafemi Awolowo University Teaching Hospital(OAUTH), Ile-Ife, lauded the Ooni for his creativity and concern to combat the novel COVID-19.

She admonished citizens to accept the reality of COVID-19 and maintain precautionary measures such as social distancing, personal hygiene, nose and mouth covering as well as staying at home order.

Similarly, The Managing Director of FTS Drones, Mr Olarinde Williams, who is a Technical Partner to the Ooni on the project, explained that he was motivated by the gesture of the monarch towards winning the war against coronavirus.

“Look at what we have here. We are prepared and ready to fumigate the entire nation. We have the mandate to fumigate with drones to complement those driving moving trucks and this we would do optimally,” Williams noted.