A shocking video has surfaced online of a monkey spotted in broad daylight trying to kidnap a little child. 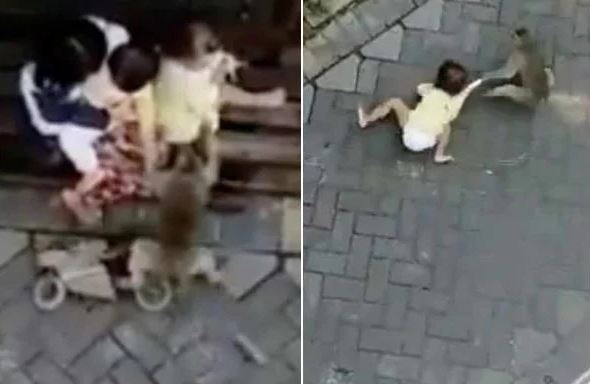 A shocking viral video was sighted  showing the shocking moment a Monkey tried to kidnap a child.

In the video, the monkey can be clearly seen trying to ‘kidnap’ a child in broad daylight.

The video which was shared by IFS Susanta Nanda, showed the monkey riding a cycle approaching a group of kids who are playing outdoor.

As soon as the monkey gets close to the children, he jumps off his bike and leaps onto a child, then drag the child for a good 30 feet before people ran in to intervene.

As soon as he saw people approaching, the monkey ditched his kidnapping attempt letting the confused child go and ran away.

The video was undated, and the location the incident occurred remain unknown.

Viral video of a monkey on a bike trying to kidnap a child.pic.twitter.com/h6KTMLhWJY